MasterCard showcased a number of its most recent innovations last night at the opening of its new NYC Technology Hub, including the MasterCard Digital Enablement System’s tokenization service that is securing ApplePay transactions. The new 60,000 square foot hub located on Fifth Avenue will house the teams behind the MasterPass digital wallet, the Digital Enablement System, and MasterCard Labs’ Start Path, an accelerator for financial technology startups.

“This is where we’re inventing what’s next … We’re building a world where everything is going to be connected. It’s not just your smartphones, it’s your tablets, your game systems, your home appliances, and it’s your car becoming a computer on wheels. So in a world where everyone is connected and everything is connected, what MasterCard can do to enable safe and secure commerce is just an incredible opportunity,” Ed McLaughlin, MasterCard’s chief emerging payments officer, said at the opening last night.

The most timely technology demonstration at the event was an NFC ApplePay payment. ApplePay, which launched with a great deal of hype yesterday, leverages tokenization from MasterCard to secure credit card credentials during transactions. ApplePay’s launch will be a boon for NFC payments technology in the US, which has lagged behind other countries in adoption, Kathleen Reilly, MasterCard’s vice president of emerging payments, said during the demonstration.

“We already have 220,000 merchants in the US accepting contactless [NFC] payments, and ApplePay will be a huge deal for getting consumers interested [in using the technology],” she remarked. 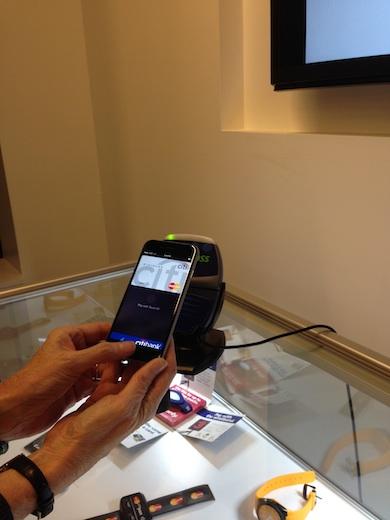