Tweet
Elite 8 honoree David Downing makes sure that technology and operations dependably connect First National of Nebraska with its customers -- just like an efficient and dependable utility.

David Downing is a student of history. First National of Nebraska's chief operating officer says he prefers histories about far-flung places such as Afghanistan and the Middle East to business books and best sellers. But it's Downing's study of something closer to home -- the creation of America's railroad system -- that provides the model for his approach to managing the operations and technology organizations of Omaha-based First National of Nebraska ($20 billion in assets) and its affiliate banks (including First National Bank of Omaha and banks chartered in Kansas, Colorado, Texas, Nebraska, Iowa and Illinois).

"Omaha is the eastern terminus of the Transcontinental Railroad. [This] is one of the key technology advances in this country's history," Downing says. "Operations and technology is the rail the bank runs on. We're not a business in ourselves -- we're facilitators who position and enable the business to meet our customers' needs."

The history of the U.S. railroads also provides a cautionary tale that informs Downing's approach to managing IT. "When you stay on the right of way, and you keep your vision clear and don't get yourself diverted, you will get things done," he relates. "It's when you try to be all things to all people ... that you get muddled down. We work hard to be very simple. We ask basic questions: What is the business model this serves? How does it make our company better? What's the bottom line? All those business cases have to be answered before we embark on a technology endeavor."

The premise may be simple, but the stakes are high, acknowledges Downing, a former J.P. Morgan Chase executive who is an accountant by training. Pointing out that his agenda and budget for 2010 already are set for all practical purposes, he's now starting to address the bank's technology needs for 2011 and 2012. "I'd like to say I wear a propeller on my hat and I do all kinds of fun things in the lab, but I do not; I run the business," he says. "We can't miss by a factor of 20 percent, 40 percent or 60 percent. If we do we've built the railroad into the swamp, and then we've got a real problem. The biggest part of my job is working with my peers -- the chairman, president and CFO -- to ensure that their vision for the next three years gets translated into our plans." 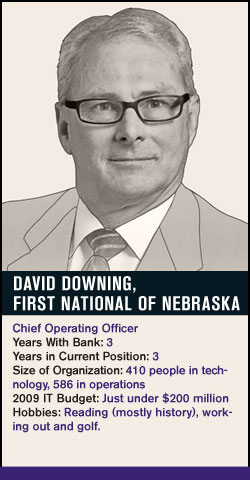 That alignment has put First National in a strong competitive position in this tough market, although Downing reports that the financial crisis has caused the bank to shift its focus somewhat "from asset growth and deposit gathering to product quality, risk management, and capital and asset security." At the same time, he emphasizes, its principles will help First National be ready for the upturn.

"I've been in banking for 25 years, [and] I think I've been practicing all my life for the past two years," Downing reflects. "We've learned a lot of lessons over the ... years and saw that if we were prepared and were conservative and knew the steps to take, we would be in even a better position to exploit the markets when things turn around. We are much more introspective right now about the things we do; we're not as willing to take a flyer on an idea. We work on only specific products and projects that will enable our banks to serve our customers and secure the bank's assets."

A top priority for Downing in his three years with First National has been to make the bank (which is primarily an IBM shop that runs Tandem servers to support its card business and partners with Cox, Qwest and AT&T to run its network and communications services) "first-class" in terms of efficiency. It starts with requiring everyone in his organization to simply "understand their business," Downing says. Additionally, "We do zero-based budgeting and strategic planning from the bottom up. We have a 24-hour rule on issues resolution. We view operations and technology as a business -- we have budgets and set goals."

Downing's thinking on IT performance and efficiency has been heavily influenced by one of his former bosses, Austin Adams, the former CIO of J.P. Morgan Chase. "One of the things Austin taught me [is that] every year you should be 5 to 7 percent more efficient than you were the year before," Downing says. "If you're not, you're telling me you're not smarter today than you were, [and] what are you doing?" Accordingly, Downing shrinks his IT budget every year. Even if an acquisition or development of a new product requires an increase in IT spending one year, "In the second year we'd better figure out how we're going to leverage that [increased] volume to lower our unit cost," he says.

Finding these efficiencies is less about implementing technology or automation tools and more about improving processes, according to Downing. "We get more efficient, we get smarter, we stop paving the cow path, we work on straight-through processing -- all simple stuff," he emphasizes. "We don't go to the automation first. It's all about understanding your businesses, taking out redundancies, ... and then applying good technology and management to it.

Not surprisingly, innovation is not an end in and of itself in Downing's organization. "I would not call us bleeding-edge," he says. "We're fast followers." This has not prevented First National from excelling in critical areas such as Internet banking or payments (specifically, a national cards business, both acquiring and issuing). But for Downing the priority is for these offerings to be reliable, efficient and secure -- just like the railroads or even a utility, another analogy he cites frequently.

"The best thing ... is that people don't know we're there," he says. "We try to keep a low profile, like the electric company. The lights come on -- they're supposed to come on." It should be no different when a check is processed or a card transaction occurs, he adds. Similarly, with Internet banking, "[Customers] expect that mobile banking will work, but they don't necessarily care how it works," Downing points out. In fact, he concedes, an interactive "branch of the future" that First National launched last year probably was "a bit ahead of our marketplace."

One way that First National has been able to accomplish this dependability on a consistent basis has been through an unusual organizational structure in which "We've put the operational groups and technology groups into the same work units," Downing says. For example, he explains, "The manager who manages ACH/wires manages the operating piece as well as the technology piece. It's a different way of looking at things, and it's been very effective. It's the collaboration between the technology people and the operations people -- the people who have to face off and do the work every day -- all reporting to the same manager. You brush away a lot of territorialism and egos." He credits this arrangement with such successes as the bank’s enterprisewide conversion to image capture in only two years and the move to an image-based day-two process that was “finished ahead of time and ahead of schedule.”