50%
Tweet
As Managing Director of Citi's technology infrastructure, Anthony DiSanto envisions the data center as the hub of business operations.

Much of the groundwork for what New York-based Citigroup's ($1.9 trillion in assets) Anthony DiSanto, Citi managing director — North American Region Head, does today was established in the wake of the Sept. 11, 2001, terrorist attacks in New York. And despite the challenge of his ongoing effort to update and consolidate the financial services company's data centers amid a financial crisis, DiSanto says he believes Citi is emerging in a better position to serve its clients and save money in the long run.

"We saved money, invested in ourselves and made the bank better," he reports. "Our uptime is significantly better than it was a number of years ago."

DiSanto's main charge with Citi has been to modernize and consolidate the bank's data centers, along with desktop standardization and updating the company's phone system. According to DiSanto, much of that work has centered around the concept of making the data center the hub for the majority of Citi's business.

"To quote one of the senior folks we have who runs platforms globally, anything that Citi does is a bit or a byte on a computer, and 95 percent of the process is through Citi's data centers," he says, adding that the data center is the backbone of all of the company's operations.

DiSanto's team consists of about 4,000 staff members in North America and another 1,000 supporting outside of North America, or about half of Citi's global infrastructure staff. "We look at our data centers and our networks as the factories and the interconnecting pipes for the whole company," DiSanto relates. 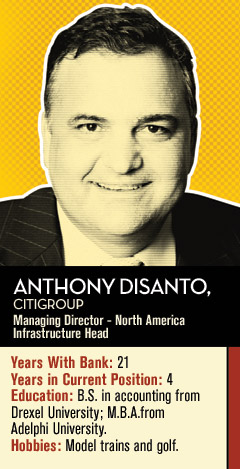 Ultimately, he asserts, the work he's done for Citi's data centers and infrastructure comprises more than cost-saving measures; the efforts have improved efficiency corporationwide. "The company itself has significantly consolidated operations and technology," DiSanto says. "As it's done that, it's become more efficient and better."

As virtualization becomes the standard, and the data center plays an increasingly important role within the organization, DiSanto adds, the work he is doing now will improve Citi's future competitive position. And he takes pride in the reliability built into each data center that serves Citigroup. "We build our data centers to be up 24 by seven by forever," he comments.

At the time of the Sept. 11 terrorist attacks, Citigroup had much of its infrastructure located within metropolitan New York, just an arm's reach from the World Trade Center. "That drove us to reevaluate every [Citi] data center in the world," DiSanto says.

Additionally, as Citi had grown over the years, the data center played an increasingly important role in the company's operations. Not only was DiSanto tasked with moving the company's data centers out of metropolitan areas, but his team also had to integrate them and build newer, more efficient operations.

"We had a number of acquisitions that needed to be integrated in," DiSanto recalls. "The server input grew rapidly, similar to a number of companies, and we realized that we had to change a lot of the operating principles because we could never keep up."

The process of consolidation had other benefits, as well, according to DiSanto. As a result of the effort, he explains, he was able to improve the quality of his team and the technology leaders he has in place. "One of the luxuries of consolidating is having more than you need at the end and being able to pick from the best," DiSanto says.

While that has meant moving some staff into different business units, DiSanto trusts the people he has put in place to do what's right for the company. To DiSanto, it's a matter of "empowering the senior folks who work for you and letting them make decisions, letting your staff make mistakes - hopefully not too big - and realizing the only things that run the data centers are other people's applications. Data centers don't exist on their own."

Building for the Future

DiSanto credits much of the success he's had to the executive team and management at Citi, and he is comfortable with the decisions being made at the top. "We have extremely supportive executive management in this company," he says.

He recalls a recent visit to an Ohio data center with Citigroup CEO Vikram Pandit. On that trip, DiSanto relates, he was able to show Pandit some of the work being done on the ground and give the CEO a chance to meet some of his staff. "I don't know that many CEOs who would take the time out of their schedule," DiSanto says. "That just shows the significant amount of support."

Consistency in leadership within his own division also is important to DiSanto. Despite the many changes Citi has gone through - whether in its executive leadership or in its business footprint - DiSanto insists that a major goal of his technology organization is to maintain consistent benchmarks for what must be done in order to succeed.

"We kept executing our plan in delivering what we process," DiSanto says. "If you continue to do that and deliver what the leadership needs, then you will be successful. I have a great team."

In his 21 years with the organization - beginning with Salomon Brothers and then Travelers Group when it acquired Salomon in 1998, and finally with Citi after it merged with Travelers later that year - DiSanto credits having had consistent leaders and role models with helping shape his own career. "I've been lucky," he adds. "I've worked for some very supportive folks in my career."

And as he positions his unit for the future, DiSanto sees more emphasis on the data center's role within the organization. "The biggest thing is, I think we're going in the future to transition to an internal cloud and continue on our standardization and consolidation efforts that will continue to yield savings that the company will invest any way it sees fit in order to grow the business," he relates.

While he is grateful the cost savings have been reinvested in his efforts to improve Citi's infrastructure, DiSanto knows how important it is to continue to make every dollar spent count. "Trillions of dollars a day go through this bank globally, and we take it very seriously to provide for our customers," he says.