50%
Tweet
When Capital One asked Julie Elberfeld, Commercial CIO of Capital One Bank, to build an IT infrastructure for its commercial bank from the ground up, she jumped at the opportunity. You might say she likes a challenge.

"I've been very focused on making sure that our team has a great on-boarding experience," she remarks. "We made sure that they had access to other Capital One associates and ensured that we gave them the right training and interaction with our customers so they know the business that they support."

Elberfeld says she started the process by hiring the team leaders who would help her direct the group's efforts. In doing so, she relates, she looked for a mix of internal hires who knew Capital One's business and were familiar with its culture and external hires who could bring the IT experience in commercial banking that her team lacked. Many of the new hires, Elberfeld notes, were attracted by the same challenge and opportunity to build something from the ground up in IT that drew her to Capital One.

Elberfeld explains that she looked for new hires who were focused on the customer and put the customer's needs first. She adds that her experience working in IT in the manufacturing sector helped her understand the importance of putting the customer first. The manufacturing company she worked for would roll out new products without testing them, she recalls. But for Elberfeld, the idea of offering a new product untested was unthinkable. "It gave me an appreciation for how important what we do is and how important it is that it works," she says. "We're dealing with people's money. This is their livelihoods." 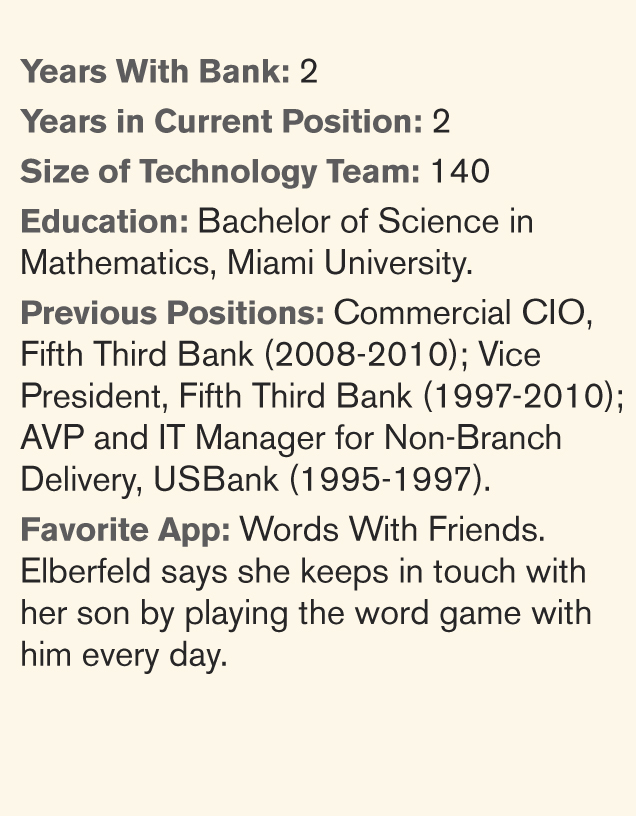 Elberfeld's focus on the people who work for her is one of the keys to her leadership style. Like many who work in IT, she says she's naturally inclined to be very detail-oriented and focused on fixing problems. But over time Elberfeld has learned that being a leader requires her to shift her focus from the nuances of IT problems and solutions to building strong relationships with her team. She recalls that years ago she heard an HR executive explain that a really great leader spends 40 percent of his or her time on people-related activities. At the time, Elberfeld says, she thought that spending that much time on people was unrealistic. But within a year she found herself reflecting on that discussion and she realized that she indeed was spending about 40 percent of her time on people and team-building.

Now, after two years of constructing a new IT infrastructure with a brand-new team, Elberfeld says, the technology organization is at the point where she can start looking toward innovating for the future. Elberfeld and her team just completed a review of their strategic goals for the next few years, and, she says, one of their important priorities is to start proactively looking for tech solutions. "We were in that mode where we went out and talked to some analysts and got a sense of where we are in the marketplace, and we've just kind of been filling those gaps," she explains. "But where I want us to get to is where IT is more consultative with our business partners and we're kind of out there in the forefront in terms of figuring out what technology is going to do."

To help Capital One's commercial bank move to the forefront of technology innovation, Elberfeld has enlisted the bank's innovation lab, which has been working on new products and services in the consumer space. Elberfeld says the lab is looking into new business-to-business opportunities for the bank. She also sees a growing demand from commercial customers for mobile products and services that mostly is driven by developments in mobile in the consumer space.

"Because the employees of our commercial clients are consumers, they are starting to have an expectation of banking whenever and wherever," Elberfeld comments. And while she acknowledges that this is an enormous task, she says work would simply be dull without new challenges.