50%
Tweet
PayPal tops Google, Apple, Facebook, and Amazon as the most trusted brand for mobile wallets according to a survey by Javelin Strategy and Research.

PayPal has been pinpointed as the most trusted brand for mobile wallets according to the "2013 Gang of Five: Apple, Google, Amazon, Facebook, and PayPal-Ebay, Threat of the Mobile Wallet Disruptors" survey, by Javelin Strategy and Research, based in Pleasanton, Calif.

Most consumers, 43%, are more likely to use a mobile wallet by their respective financial institutions. PayPal came in second with 34% of respondents and has the highest gains in consumer perceptions over the past year. About 25% have chosen MasterCard MasterPass, while 24% have selected Google Wallets.

One implication is that “data, revenue, and relationships are all at stake, depending on whether wallets move to hide the funding source behind the wallet provider. The merchant-customer relationship is simply at risk,” according to the report. 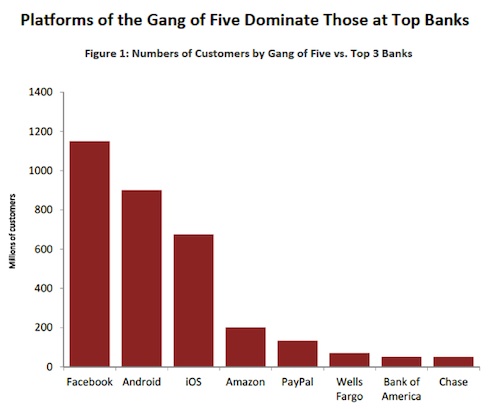 Chart from the "2013 Gang of Five: Apple, Google, Amazon, Facebook, and PayPal-Ebay, Threat of the Mobile Wallet Disruptors" report

According to the report, all 5 brands went up between 5 to 10 perception points over the past year. Other brands remained flat of posted losses.

In terms of the top feature a mobile wallet must have, 63% have selected the ability to comparison-shop. Also, almost half of all smartphone or tablet owners said they would use their phone to make a purchase at the store of checkout. Additionally, one in five consumers are ready to adopt a mobile wallet in the next year, according to the Mobile Wallet Game Changers: A Glimpse into 2014’s Projected Winners and Losers survey by Javelin.

Zarna Patel is a staff writer for InformationWeek's Financial Services brands, which include Bank Systems & Technology, Insurance & Technology and Wall Street & Technology. She received her B.A. in English and journalism from Rutgers University College of Arts and Sciences in ... View Full Bio