50%
Tweet
Washington has taken a strong stand on financial reform, and bankers say they understand that. But already-burdened technology organizations will have a hard time keeping up with the flood of changing requirements, and IT innovation may be the first to fall victim.

Talk to bankers about the financial reform bills -- the House's Wall Street Reform and Consumer Protection Act of 2009 and the Senate's Restoring American Financial Stability Act of 2010 -- being reconciled in Congress (with a possible vote before July 4), and three phrases come up a lot: "Unintended consequences," "The devil is in the details" and, "It scares me."

No one is arguing that some type of post-crisis reform is inappropriate. In fact, Bank of America CEO Brian Moynihan told CNBC's Maria Bartiromo in April, "We think a lot of the reform package is very good. We support a lot of it. And we think it will help move the country, the world and our industry forward."

Specifically, Moynihan expressed support for the provisions around consumer protection, derivatives clearing, risk reporting, and even higher capital and liquidity requirements. "As an industry we're going to have less leverage and more transparent risk," he said. "All those are good things."

Arthur Johnson, CEO of Grand Rapids-based United Bank of Michigan ($437 million in assets), acknowledges that "There's an awful lot of good intention [in the reform bills]. There's stuff about 'too big to fail,' which is very important. The creation of a regulatory systemic risk council is necessary. In my bank, we absolutely have the right to fail; that's a right I'd like to share with the entire industry." 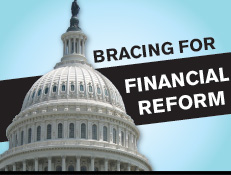 But much of the impact of the final bill is unknown, because not only do the House and Senate members have to agree on the final language of the consolidated law, it will be up to bank regulators to interpret its requirements and draft the specific regulations that banks will have to follow. "Part of the problem of this bill is that the devil will be in the details of the regulations, which will take years to complete," says Lawrence Kaplan, a bank regulatory attorney in the corporate department of law firm Paul Hastings' Washington, D.C., office.

According to Kaplan, many financial technology deals are being put on hold because of the still-pending law. "There's a lot of uncertainty, and right now it's stifling innovation because we're all waiting to see what happens," he contends.

Bankers and observers agree that the wide-ranging scope of the final financial reform bill could lead to many unintended consequences, especially for smaller institutions. "Some of the reform act addresses the crisis we went through, but there are lots of changes that have nothing to do with the crisis," asserts Paul Schaus, president of consultancy CCG Catalyst. "This is where the uproar is coming from the banks."

Of course, whatever the final rules turn out to be, they will dramatically impact bank IT departments. "IT is going to be very important -- the systems and procedures will be key" for compliance, Paul Hastings' Kaplan says. "And there's an incredible market here for developers who can come up with state-of-the-art compliance solutions and keep up with the changes."

But preoccupation with compliance could prove to be costly for banks. When all is said and done, they may have to change their business models, suggests Srini Giridhar, banking lead with the IBM Institute for Business Value. "Banks do need to innovate -- they exist for the shareholder," he points out. "It's just that they also have a special public responsibility, and the risk therein calls for balance."

John Buhrmaster, president of 1st National Bank of Scotia ($321 million in assets) in Scotia, N.Y., says his bank's IT staff already is burdened with making systems enhancements as a result of recent regulatory changes, including revisions to Regulation DD (Truth in Savings Act), Regulation E (for electronic funds transfers) and Regulation GG (regarding unlawful Internet gambling). According to Buhrmaster, changes to Reg DD, in particular, have held up the bank's efforts to introduce mobile banking.

"When that rule changed, the product was almost ready," he explains. "Then the vendor had to go back in and make fixes to deal with Reg DD."