50%
Tweet
U.S. Bank wrapped up a donations drive today for victims of the Oklahoma tornadoes that allowed customers to donate to the American Red Cross directly from U.S. Bank ATMs.

U.S. Bank customers have been donating to American Red Cross relief efforts for the victims of the Oklahoma tornadoes at more than 2,000 U.S. Bank ATMs in 25 states. The bank developed split screens for its ATMs to facilitate the donations for the initiative, which began on May 22 and ended today. 100% of donations went straight to the Red Cross account and customers received a receipt for tax purposes with a thank you. 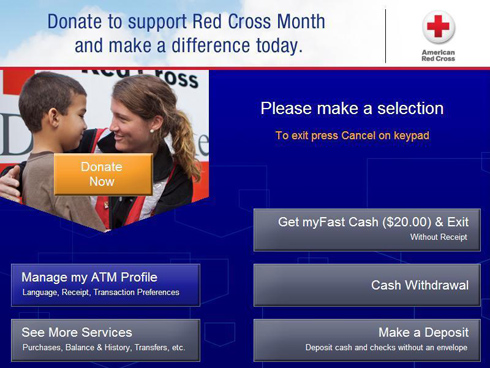 “We run lots of campaigns, but this is the first time for a charity,” says Patty Henneke, ATM manager at U.S. Bank. “We worked with Red Cross for weeks in developing the screens on the ATM.”

This is the first time U.S. Bank launched a charity campaign on their ATMs. According to Director of U.S. Bank Foundation, John Pacheco, customers like that the immediacy of money from their checking account going straight to the Red Cross and that the receipt prints out right after the transaction is complete. The foundation has also pledged to match all donations made by U.S. Bank employees to the relief effort.

Pacheco describes this as an extension of the campaigns they do with the Red Cross, which have included a blood donation campaign and a CPR training program for U.S. Bank employees.

Zarna Patel is a staff writer for InformationWeek's Financial Services brands, which include Bank Systems & Technology, Insurance & Technology and Wall Street & Technology. She received her B.A. in English and journalism from Rutgers University College of Arts and Sciences in ... View Full Bio