50%
Tweet
Angelo Valletta, SVP and CIO of Sun National Bank, is always ready for what's next, which helped the bank be the first in its market to offer mobile banking and a pioneer in the use of social media.

But when it comes to building customer relationships, Valletta sees the most potential in the marriage of social media and big data. The bank already uses social media to engage its customers online. Currently, Sun National runs a website called brilliantbusinessstory.com, where it encourages its business customers to upload a video detailing a great business idea they have.

"Understanding the touch points of our customer base, and being accessible and having people connect to us through Facebook, Twitter, LinkedIn -- that will be very important in the future," remarks Valletta, who is an active LinkedIn and Twitter user himself. Valletta says he frequently shares articles, makes new connections and tweets inspirational quotes from a diverse list of people that includes Vince Lombardi, Martin Luther King Jr. and Valletta's mother. 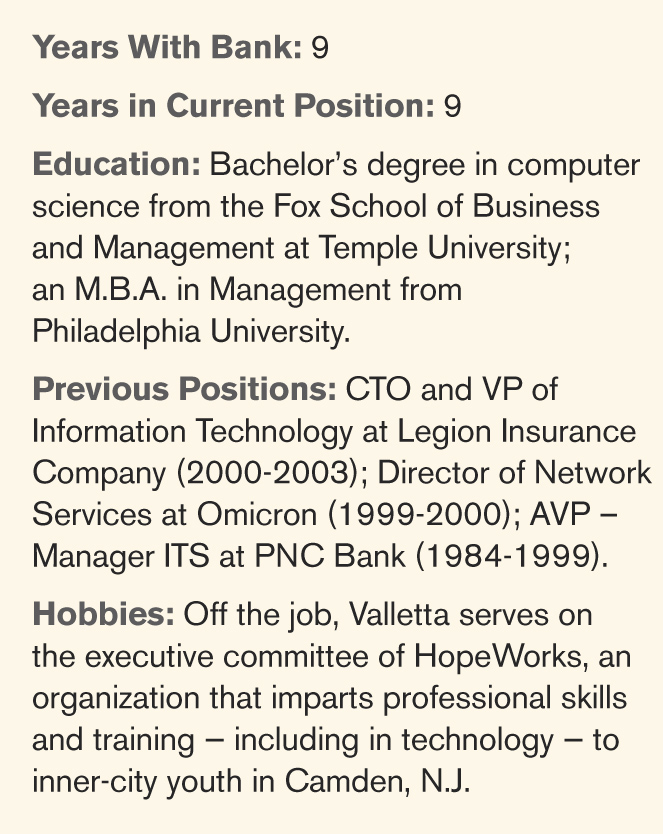 Taking the information that Sun National gets about customers through social media and integrating it with the data that the bank already stores in its central data repository could open up many new opportunities for the bank, Valletta says. But the key, he notes, will be learning to use social media the right way. For example, if a customer posts on Facebook about how much he is enjoying watching the sunrise at the Jersey Shore, Valletta poses, should the bank comment on that post, telling the customer that it's great that he is enjoying the sunrise, but that the bank could help make the day even brighter by lowering his student loan costs? Valletta admits he doesn't have the answer, but finding the right balance will be key to how banks and customers interact in the future, he predicts.

"How can we be socially responsible with it?" he asks. "It's about engaging your customers and having a conversation with them to take the relationship to the next level. And we'll have to build those relationships through social media."