50%
Tweet
Wells Fargo this month announced the opening of the first of what it says will be a new bank branch format. 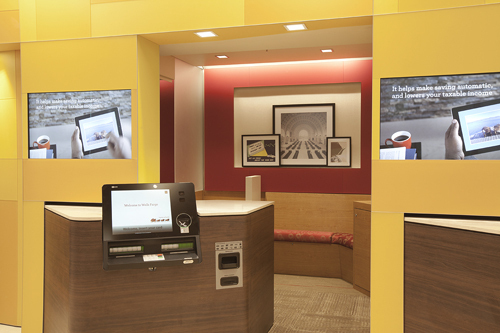 There has been much debate in the banking industry over what the "branch of the future" will look like. Last week, Wells Fargo announced its vision of the next generation branch, which it is calling the "neighborhood format."

These branches are approximately 1,000 square feet -- about a third of the size of a typical Wells Fargo branch -- and will offer personalized service in settings not suitable for its larger stores.

Here's a look at some images of the first Wells Fargo neighborhood store that opened in Washington, D.C. in April.

Here is a view of the large-screen NCR ATM that will be part of the new branch format. ATMs that dispense $1, $5 and $100 bills will be available in addition to the $20 bills a typical ATM offers.

During business hours the yellow doors behind the ATM open up, revealing a private area for customers and team members to have one-on-one financial conversations, the bank said.