Because it's intertwined with customer experience, design can be just as important to adoption of a technology as the technology itself -- a concept proven by the success of Apple products such as the iPod, iPhone and iPad. It's also a concept that BBVA (Madrid, Spain) clearly understands.

The bank's ATM prototype, dubbed ABIL, has received recognition from a few different organizations, including the Industrial Designers Society of America, for its innovative design. In addition, ABIL just finished a run on display at The Museum of Modern Art in New York as part of an exhibit called "Talk to Me: Design and the Communication Between People and Objects." I went to MoMA on Nov. 4, a few days before the exhibit ended, to meet BBVA executives who came to discuss and demonstrate ABIL.

BBVA executives explained that the ABIL, which the company began to develop in 2006, was designed based on customer needs and wants. Features include a touch-screen interface, an ergonomically friendly tilt, and only one slot for inserting deposits and receiving receipts or money. A virtual teller named Hero, who "lives" in the ATM, greets customers and guides them through transactions instead of just the usual text prompts.

And although it was displayed differently at the museum, the ATM usually sits tilted in a white cradle that floats out from the wall in a way that easily accommodates people with disabilities. The apparatus even has a multipurpose shelf for setting down personal items or signing paperwork, as well as a privacy shield. 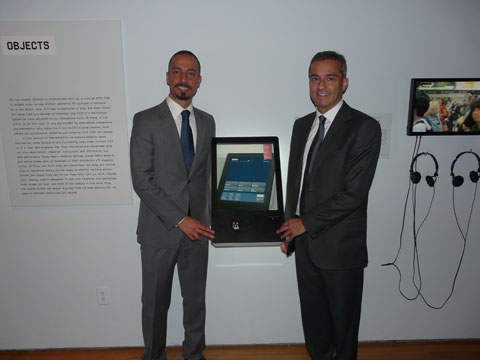 
My first impression of ABIL was that it is remarkably different from a traditional ATM. Its sleek and simple touch-screen design reminded me of an iPad more than anything. Before I could mention the similarity, though, David Zafrilla, MIT-based strategy and innovation manager for BBVA, said, "Some people tell us the design looks like a huge Apple iPad. We're flattered."

Whether ABIL will have success similar to that of the iPad remains to be seen. Currently in a final pilot phase at some BBVA branches in Madrid, the ATM has received a positive response so far. "We've noticed that anyone using ABIL right now in Spanish branches -- no matter the age or the profile of the customer -- when they use it they smile. And that's very important," says Zafrilla.

See a video demo of ABIL below.