50%
Tweet
The increasing use of automated processes could expose organizations to new forms of malware if proper monitoring and controls aren’t put in place. 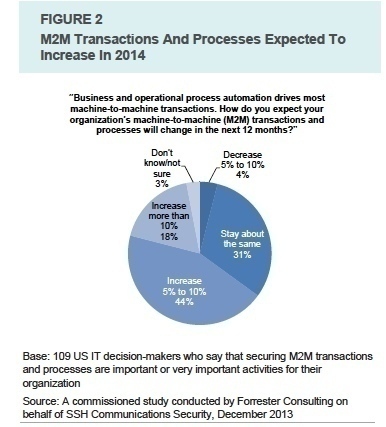 Financial institutions are increasingly relying on automated processes to run their business and IT infrastructures, but may not be doing enough to secure those automated processes from security threats, according to a study conducted last November by SSH Communications Security and Forrester. The study, conducted across several industry verticals, found that of the 109 organizations that said that machine-to-machine processes were important to their operations, 62% expect an increase in automated machine-to-machine processes over the next 12 months. In financial services, much of that increase in automation is around sensitive parts of the organization, such as billing and data management processes. More than half of the financial institutions in the survey already use machine-to-machine connections in their billing processes.

Many of organizations involved in the study use secure shell (SSH) keys to help secure automated processes like sending data form one machine to another (41%), administrator access control (40%), securing machine-to-machine transactions (35%) and data center management automation (31%).

But there is a growing threat in protecting those SSH keys from falling into the wrong hands. Just this month Kapersky Labs uncovered a malware virus, called “The Mask,” that targeted organizations’ SSH keys. “We’re seeing growth in these malware attacks that focus on encryption keys,” says Jason Thompson, director of global marketing at SSH Communications Security, the creator of the SSH security protocol. “If someone gets a hold of those keys, and the organization doesn’t have any monitoring or forensics in place, then they will be giving up critical information in a blind spot.” That makes it increasingly important for companies to ensure they have security and monitoring controls in place to protect access to their SSH keys for their automated processes, Thompson argues.