On the road to electronic wallets and true mobile payments, the contactless payment is a necessary stopover, according to an April report by Javelin Strategy & Research (Pleasanton, Calif.). "Don't mix up contactless and mobile payments," warns Javelin president James Van Dyke. "One is a short-term stop; the other, the long-term destination." 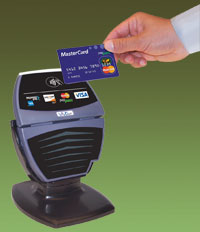 Contactless payments are accomplished via credit cards, key fobs and other devices using RFID (radio frequency identification) chips that transmit payment information just by waving the device near a reader at the point of sale. Van Dyke concedes that he can't make a business case for contactless by itself. "But if you don't get contactless to work now, you'll never get to mobile," he stresses. "[Contactless] creates the rails for the long-term destination of mobile payments."

But that doesn't mean that contactless payments don't have value for banks. The immediate goal of contactless transactions, according to the Javelin report, is to reduce or eliminate payments by cash and check, in turn reducing processing costs for banks. Banks also can put much more information on a chip than a mag stripe — "preferences, couponing, more smarts," according to Van Dyke — enabling more customer analytics. "This is the short-term reason why banks should be excited [about contactless]," Van Dyke says.

Although contactless payments have been slow to catch on in the United States, Javelin reports that 24.8 million consumers worldwide will use chip-embedded credit cards for contactless payments this year, and the firm estimates that the number will double within five years. Contactless in the U.S. is rolling out "in dribs and drabs," Van Dyke relates, adding, "Merchants aren't really ready."

Van Dyke explains that merchants don't see the need to make the investment in the hardware. "Who pays for merchant terminals when no one can use it?" he asks. Fast food chains, gas stations, convenience marts and sports stadium concessionaires have led the adoption of contactless payments, but it required "significant subsidies from card networks," according to the Javelin report.