50%
Tweet
It is the best of times in the worst of times for the harried financial CIO to take a sabbatical, argues former BITS CEO Cathy Allen.

Financial services CIOs are the most pressurized of all and so particularly prone to burnout, says Cathy Allen, chief executive of The Santa Fe Group consultancy in Santa Fe, N.M. Relative to other industries, banking "still has a ways to go" for work/life balance, she adds.

Allen's advice to bank CIOs is to take a sabbatical, the theme of her forthcoming book. Allen practices what she preaches, having taken two sabbaticals over an illustrious career as a banker, consultant, and founder and former CEO of the Banking Industry Technology Secretariat (BITS). 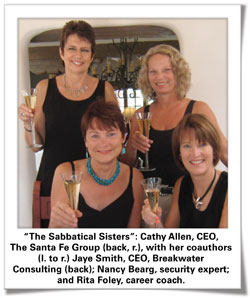 The new book, "Reboot Your Life: How Taking Time Off From Work Will Enhance Your Personal and Professional Life," is expected to be released next year. It's authored by a foursome that has dubbed itself "The Sabbatical Sisters" — Allen and coauthors Jaye Smith, CEO, Breakwater Consulting; Nancy Bearg, a security expert; and Rita Foley, a career coach.

The Sisters are members of a female executives networking group, and the book was conceived at one of their retreats. "We all talked about taking sabbaticals and the need to be able to reflect on what you want," Allen recalls.

Allen's latest sabbatical was largely spent working on the book, she admits with a laugh. But time to oneself is less about hibernation and more about creation — tuning in to what you want in your life and what can best contribute to your job, she suggests.

Replenished workers are better workers, Allen says, which is why she contends that even in the midst of the financial maelstrom, employers should offer sabbaticals. "You might say it's the worst time for a sabbatical. We're saying it's one of the best times," Allen comments. "Of the people you have left, you've got to have them as creative as possible."

Employees actually fear taking sabbaticals more than companies fear offering them, according to Allen. Even paid sabbaticals might leave employees anxious that their positions could be in jeopardy, she says.

For many, the worry is financial. "People say, 'I wish I could do that.' Some are feeling trapped — they've got mortgages and babies, and they say, 'There's just no way,'" Allen relates.

"The fear on the company's side is [that employees] might not come back," Allen adds. But in fact, she says, "Of every company that was supportive of sabbaticals, the employees went back." At a company such as Intel, which offers employees a paid three-month sabbatical every seven years, it's a great draw, Allen notes.

The Sabbatical Sisters expect to confirm at least 50 companies that offer paid sabbaticals — most are service firms, some financial. Even on unpaid sabbaticals, "All offered some compensation, such as a continuation of medical insurance or 401(k) contributions," Allen says. "Sabbaticals outside of academia are quite new," she continues. In the business world a sabbatical is typically three months, sometimes one. Among 125 individuals interviewed for the book who took sabbaticals were a top executive at Northern Trust and a commodities trader.