50%
Tweet
Forced unions, toxic assets and politics all raise the stakes for recent bank mergers. However, some basic M&A principles are as true for today's hastily arranged megamergers as they are for traditional acquisitions.

"May you live in interesting times." The way the financial services industry is being battered lately, it seems as if this ancient Chinese curse was custom-made for today's banks. 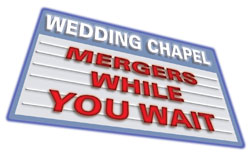 Over the course of just two months, the world saw some of the most prestigious financial services firms left to die (see: Lehman Brothers), while others were compelled by the federal government into hurried unions in an effort to keep the economy afloat. After being sucked into the vortex of bad mortgages, Charlotte, N.C.-based Wachovia ($764.4 billion in assets), considered a bastion of customer service, found itself at the center of an "acquisition triangle" between New York-based Citi ($2.1 trillion in assets) and San Francisco-based Wells Fargo ($609 billion in assets), which ultimately claimed Wachovia as its prize. J.P. Morgan Chase (New York; $2 trillion in assets) became the new owner of Washington Mutual (Seattle) and its failed portfolio. Charlotte-based Bank of America ($2.7 trillion in assets) stepped back into the investment banking space with its acquisition of Merrill Lynch (even after BofA CEO Ken Lewis said he'd had his fill of that kind of banking). Most recently it was announced that Pittsburgh-based PNC ($146 billion in assets) would acquire National City (Cleveland; $150.4 billion in assets). And the list will go on, say experts.

What's most striking about these marriages is that, unlike traditional mergers, the recent spate of government-backed acquisitions leaves the acquiring banks with little time to do their homework -- including analysis of the systems integration and staffing implications of the deals. The potential for risk exposure, then, is greatly amplified. "These are shotgun weddings," says Sean Drewitt, strategy and transformation consulting leader with Paris-based CapGemini. "A lot of the preplanning and due diligence can't take place. They're finding out a lot [about the acquired assets] after the fact."

Jim Gahagan, global industry executive for financial services with Columbus, Ohio-based business process integration provider Sterling Commerce, definitely sees a distinction between the current mergers born of necessity and traditional unions. "A lot of the past mergers were very calculated, strategic plays," he explains. "This is a different climate. It's a reaction to liquidity. The rate at which this change happened and the volume of mergers occurring at one time is a big difference."

But whether a bank acquires another under duress or a merger occurs for more practical reasons around synergies and cost savings, there are several best practices banks should keep in mind to make the process less painful. BS&T contacted a number of institutions, including J.P. Morgan Chase and Bank of America, that have been involved in recent deals for their input on the current M&A environment, but all declined comment. However, the experts who help financial institutions through these lengthy integration projects have several tips to facilitate a more seamless union.

While the speed with which many of today's megamergers are occurring doesn't permit the most careful evaluation, due diligence nonetheless is vital to any successful merger plan. The acquiring banks must keep up their efforts to attempt to see what it is they are inheriting. "I can't over-emphasize homework and due diligence," says Thomas McAllister, industry principal with SAP's (Walldorf, Germany) financial services group.

McAllister was once a bank CIO and has been involved in his share of M&As while in that role. "I knew as a CIO well in advance that we were going to buy someone," he relates. "Today it's happening so fast. You still have to do the due diligence so you don't bring more risk into your own systems."

McAllister points out that with advances in technology, the available information on an acquisition target is better organized. "From a systems perspective, the information is a lot better today, especially around the financials, because the technology is so much better," he says.