50%
Tweet
Elite 8 honoree Fred Cook has helped establish North Shore Credit Union's IT organization as a major enabler for the business as it experiences tremendous growth and high retention levels.

When he isn't in a meeting, North Shore Credit Union (NSCU) CIO Fred Cook's office is rarely quiet -- not with the sounds of Miles Davis, John Coltrane and other jazz musicians percolating in the background. "I tend to play a lot of music in the background when I'm by myself in my office," Cook relates. "That definitely is a good stress release."

But it wasn't always that way for the former music major. There was a time when music was a source of anxiety.

Before Cook stepped into the CIO role at NSCU in late 2003, as part of the interview process the North Vancouver, B.C.-based financial institution asked him about stress in IT and the business world. Cook, a percussionist, drew on his experience in the music world: Stress, he told the two interviewers, is playing in an orchestra when your only responsibility is playing the triangle for eight measures at bar 428 of a piece of music but losing your place at bar 200.

"You've got about two minutes to figure out where you are before you have to hit this piece of metal that has to pierce through the orchestra," Cook says. "If you're wrong, it's not that anybody is going to die or anything like that -- it's just that 80 people in the orchestra are going to think you're an idiot because you can't count, the conductor is going to give you dagger eyes because you just ruined his piece and about half the people in the audience ... will say, 'I don't remember that triangle being there.' Now that's stress." 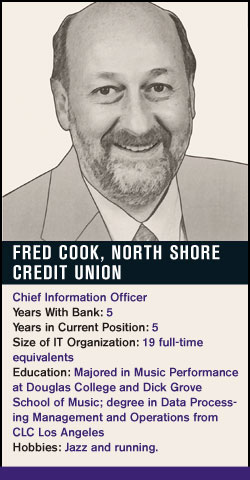 It has been a long time since Cook gripped a triangle or a pair of drumsticks at the back of an orchestra. And yet, he says, music has been instrumental for him as he's helped lead NSCU's technology organization during a time of tremendous growth and transformation. "That's how I've been able to multitask," he notes with a chuckle. "I've applied some of those disciplines I learned and had to execute as a music major to the business world."

Indeed, multitasking has been a key talent for Cook in his time at NSCU. In his five years at the financial institution, Cook has established the IT team as a partner of the business and key supporter of the credit union's goals, which have been far ranging: from growth and customer retention to competitive differentiation in a saturated marketplace and improved customer experience.

So far Cook has performed like a maestro. In part because of its advancing technology capabilities, NSCU has seen a dramatic increase in revenue (up 41 percent) and profitability (up 40 percent), according to one of the credit union's vendor partners. Cook credits those gains to a larger corporate strategy put in place by NSCU president and CEO Chris Catliff, who joined the company in 2000.

At the time, Cook estimates, the company had a membership of approximately 40,000 people and assets of about US$552 million. Now it has $1.8 billion in assets, though its membership still hovers around 40,000. "We've been able to do a much better job of targeting those who make the most sense for us on profitability," Cook points out.

Perhaps no technology has contributed as much to the credit union's recent growth as a Pivotal CRM system from CDC Software (North American headquarters in Atlanta). North Shore has been using the customer relationship management (CRM) technology for nearly a decade but subsequent upgrades made during Cook's tenure represent major strategic shifts for the credit union.

Previously, Cook says, the institution took a mass market, everything-to-everyone approach to its customer base. Recently, however, it has shifted to a more boutique approach in which it seeks to deliver certain sets of services to certain customer segments. According to Cook, the new CRM system, along with a business intelligence (BI) warehouse, has helped NSCU deliver on the new strategic approach, which requires it to identify those segments and manage multiple relationships. "We segment like crazy, in terms of targeting and ensuring that we're dealing with the right member with the right products at the right time," Cook says.