50%
Tweet
Whitney National Bank's Francisco DeArmas is undeterred as he embarks on some of the most daunting projects for a bank technologist -- all at the same time.

Maybe Francisco DeArmas is a glutton for punishment. Maybe he just likes a good challenge. Whichever the case may be, DeArmas, EVP, CIO -- operations and technology division with Whitney National Bank, certainly has his hands full as he upgrades the New Orleans-based institution's core banking system; moves forward with a massive cross-channel, multi-vendor customer service initiative; and throws in an enterprise resource planning (ERP) system upgrade for good measure.

"The first thing a CIO does when he arrives is to look at what he has to work with," DeArmas says, recalling his own experience when he joined Whitney National two years ago. "Our technology wouldn't keep up with what and where we wanted to be. We knew we needed to change. This was an opportunity for us to modernize the bank."

According to DeArmas, Whitney's Fidelity National Information Services (Jacksonville, Fla.) core system had been in place since 1991. Following a major request for proposals, he says, the bank decided to replace it with Jack Henry & Associates' (Monett, Mo.) SilverLake system. The replacement kicked off early this summer. "The project started in technology, but it's really a business project for us to see how we can maximize processes to best serve our customers," DeArmas relates.

DeArmas points out that Whitney, which has $12 billion in assets, is just the right size for a manageable core systems replacement. "There's that sweet spot of about $10 billion in assets to about $30 billion in assets where banks have the opportunity to be able to transform their organizations in manageable chunks," he explains. "We're at the point in our life cycle where if we got a little bigger such a project would start to become unwieldy." 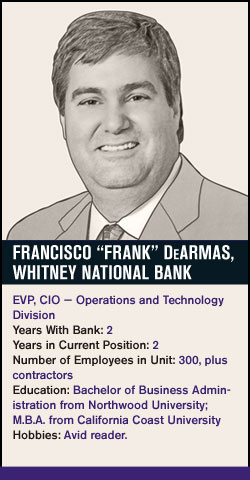 But the core replacement is just the beginning of Whitney's tech transformation. To further its commitment to remaking itself into a more customer-centric organization, the bank also has launched a project to build a more modern customer service technology architecture. With this initiative, DeArmas reports, the bank hopes to expand its service capabilities while lowering operating costs.

The project will encompass commercial and retail banking as well as multiple channels and provide for expanded electronic funds transfer capabilities, enhanced risk management and protection solutions, item and document imaging, and professional services and education, according to DeArmas. The idea, he notes, is to build deeper relationships while also offering customers the ability to bank where and how they want.

"We use the word 'transform' a lot when talking about this project," DeArmas explains. "But at the heart of it all is keeping the spirit that served Whitney for 125 years: It's a people bank. We have relationships here that go back generations. One thing that struck me when I got here was when a customer told me that his great-grandmother said Whitney was the only New Orleans bank that didn't close during the Great Depression. We want to make sure we maintain these kinds of relationships so we're augmenting our capabilities to serve our customers in the way they want."

DeArmas understands the multichannel nature of today's banking firsthand. Not only does he rarely ever visit a branch, but that also is the case with his college-aged daughters. "The only time they've been to the branch is when they opened their accounts before going away to college," he relates. "They do everything with their debit cards. They go to the ATM, they check their balances online, and text alerts are huge for them, too."

Of course, technology is enabling all of the bank's transformation efforts. But, DeArmas stresses, it's important to remember that the tech shop doesn't exist to create the greatest whizbang gadgets; after all, Whitney is not a technology company. "All that operations and technology does supports the mission to provide financial services to our customers," he says. "I arrived at the bank and they already had their strategic plan of where the leadership wanted to go -- this was great for a CIO to have so I could align my resources with this plan."