50%
Tweet
Bank CEOs say they promote IT/business alignment, but many businesses fail to do so, according to a Diamond Management & Technology Consultants study.

Contrary to popular belief, financial firms are not quite the champions of IT/business alignment that many profess to be. According to a Diamond Management & Technology Consultants (Chicago) study, while 83 percent of C-level business and technology executives predict IT would increase competitiveness, enable new market entrants or both, less than one-third strongly agree that their CEOs champion technology and include CIOs in strategic planning.

Aamer Baig, a manager with Diamond who was involved with the study, says he expected financial services companies to fare better on this measure. "Having advised a number of banks over the years, I know what a strategic lever technology is for their business," he comments. "I was hoping they'd be much farther ahead of the rest of the industries polled. However, financial services tracked very closely to the overall findings. When we ask [financial services executives] if technology is a valuable competitive asset, they all say yes -- as we expect. But when we delve deeper and ask if the CIO sits at the table, their answers were slightly different."

In its annual Diamond Digital IQ survey, Diamond asked 456 C-level business and technology executives at large companies ($90 billion in assets or more) across industries about a variety of strategy, management and technology issues. Eighty-four percent of the 37 financial services executives who participated in the survey said IT plays a major role in the strategic success of their business. However, just 76 percent of financial services respondents said their CIOs were very involved in the business strategy development process. 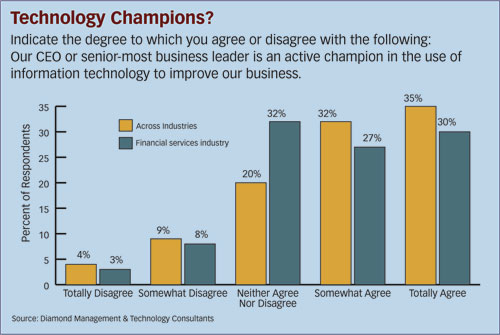 In an industry that relies so heavily on technology to drive innovation, Baig suggests, the survey's findings appear counterintuitive -- not to mention, counterproductive. "Technology creates new products and channels. ... In financial services, the technology can allow you to create new opportunities," he says. "The product is often information, so technology is critical."

The Value of IT

Baig maintains that the value of technology is realized by involving IT in the planning process, involving business in delivering larger technology programs, and creating good partnerships between business and IT. He points to four main drivers for financial institutions when making IT investments: "What's relevant to financial services is that most of the value of technology they receive is either to compress time to market for products, improve risk/controls, lower cost or improve client service," Baig says. "The way firms execute this is inhibited by the fact that some haven't established a strong alignment between business and IT."

Part of the problem apparently stems from company leadership. According to the survey, only half of financial services respondents (57 percent) agree that their CEOs are champions of IT, compared with 67 percent for the cross-industry findings.

Still, Baig says, while there are company heads who think of IT as a cost center and not a competitive weapon, they will become a rarity. "We're moving toward the era of the tech-savvy CEO," he observes. "We're seeing CEOs of divisions coming up the ranks who grew up with technology."

In the interim, Baig asserts, to get the most return on their technology investments and succeed in an increasingly competitive financial services landscape, banks must focus on three keys: establishing enduring leadership in technology; gaining a strong view of firmwide architecture and sharing a common blueprint for the future; and instilling a disciplined culture of execution over time and working toward that blueprint. "Companies that do this successfully leverage their technology," he says.