50%
Tweet
BS&T research reveals that while 2012 bank IT budgets are likely to grow over 2011 levels, an array of competing investment priorities will challenge CIOs to make the most out of still-limited resources.

Illustrating how difficult it can be for banking executives to manage sometimes-competing priorities even when IT budgets are growing, recent Bank Systems & Technology research indicates that banks' priority areas for IT investment in 2012 will be regulatory compliance and risk management, followed by customer experience and channel optimization.

In an online survey conducted by BS&T in October 2011, almost half of the respondents (40.7 percent) indicated that regulatory compliance, risk management and security would be the top areas for IT investment in the coming year (see chart, below) -- an unsurprising response given the continuing uncertainty about global banking regulation in general and the impact of the new Dodd-Frank legislation in the U.S. in particular. And 30.8 percent of the bankers identified compliance-related projects as the top challenge facing their banks' IT organizations in 2012.

At the same time, competitive pressures, growth imperatives and changing customer expectations also must be addressed, and almost one-fourth of the respondents (22.2 percent) to the BS&T survey pointed to customer experience/channel optimization as the likely top area of IT investment in 2012, followed by mobile banking (14.8 percent). Meanwhile, 15.4 percent identified enabling appropriate security for emerging channels such as mobile and 11.5 percent cited the consumerization of technology in general as critical challenges for the coming year.

Data management, which is essential both to compliance and to delivering a better customer experience, ranked fourth in terms of priorities (11.1 percent). And since none of these priorities and challenges can be effectively addressed without modern and flexible systems and infrastructure, it's not surprising that nearly one-fourth of the participants (23.1 percent) in the BS&T research reported that their legacy systems present the top challenge for 2012 (even though only 7.4 percent of respondents said that core systems would be the top area of IT investment at their banks).

Look on the Bright Side: Growing Budgets

These findings were reinforced by informal audience polling conducted by BS&T at its recent Executive Summit event. Forty percent of the participating attendees said they believed their IT budgets would increase by more than 3 percent in 2012. In addition, 50 percent said that limited budgets/resources would be the biggest challenge facing their departments next year, perhaps indicating that even though many foresaw budget increases, they will not be as big as hoped. 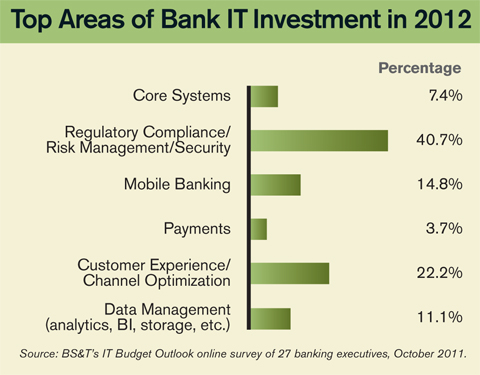