50%
Tweet
Ashworth emphasizes the importance of collaboration for IT success. 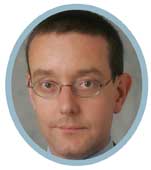 Michael Ashworth, Managing Director & CIO, Investment Bank, JPMorgan
JPMorgan's investment bank managing director & CIO, Michael Ashworth, discusses how technological flexibility and agility has allowed the $1.3 trillion financial institution to weather significant acquisitions and ultimately come out on top at the end. He also relates the importance of leveraging existing technology infrastructure across the enterprise to get a leg up on the competition.

One might say it was in the numbers that Michael Ashworth would some day end up in financial services. The managing director and CIO of JPMorgan's investment banking unit was studying to be a statistician in college, but soon came to realize just how comfortable a living he could eke out in banking. "I discovered that banking paid better," Ashworth quips.

Ashworth joined JPMorgan in 1986 in London as a programmer and has managed to work his way up the system since then. He now oversees IT in one of the most lucrative divisions at the $1.3 trillion asset financial institution. The investment banking unit generated record fees for the second quarter of 2006, contributing significantly to the bank's overall solid financial gains for that period.

Of course, Ashworth notes that technology should not take all the credit for his division's stellar performance. "I wouldn't claim all those results were due to [the IT department]," he says. "But we were certainly part of the reason for [the unit's] success because technology is a huge enabler of business. If we didn't do what we do, the business couldn't continue to grow. It was much more of a collaboration."

Collaboration and teamwork help form the cornerstone of Ashworth's management style. "We don't want to hire genius loners who don't like working with other people. It's very much a teamwork environment here," he explains.

Like many of this year's "Most Innovative CIOs," Ashworth believes people can make all the difference in IT. Making the right hiring decisions is one of his most important roles as CIO, he says. "The last thing you want to do is hire people who are less clever than yourself. I want to hire the best talent, unleash them on the most difficult problems and then I get out of the way," he explains.

When it comes down to it, IT is always faced with problems of one sort or another, whether it involves the nuts and bolts work of implementing new systems or operating within the set budget. Ashworth predicts these challenges will only increase with time throughout the industry. One of the greatest hurdles IT executives will face is "being able to deliver solutions to complicated problems in a complex environment," he remarks.

Ashworth knows he is operating in an area that is constantly in flux. Therefore, he says it will be vital for him to create an IT infrastructure that is flexible enough to help the organization quickly adapt to changes. Part of his strategy is to continue to leverage solutions that are already in place across the bank. "My vision is to build an organizational structure with the ability to deliver in a fast-changing environment rather than say I can predict the future and exactly what we'll need," he explains. "We want to leverage the solutions we already have in place so we don't have to build everything from scratch."

Smart management goes a long way. However, the culture of the bank is what can ultimately shape the organization going forward. "The exciting thing is that we're one of the leading financial institutions in the world and want to be the leading financial institution," Ashworth relates. "It's good to be in an environment where we have the ability to invest in technology. There's a desire to see technology as a competitive advantage in situations. The challenge is the people."

Size of IT Department: 5,500 worldwide

Hobbies: Photography, and hiking in North America, Scotland and Africa

Recent Reading: "The Island at the Center of the World," by Russell Shorto