50%
Tweet
BS&T's Elite 8 indicate that the BlackBerry is the boon -- and bane -- of every bank technologist's life.

A search for "gadget" on Yahoo! produces 272 million results, but to hear bankers tell it, there's only one: the BlackBerry. The smart phone from Waterloo, Ontario-based Research in Motion was the standard response when we asked this year's Elite 8 honorees and a few of last year's Most Innovative CIOs to identify their favorite gadgets -- for business or pleasure.

There's surely something Freudian to bank technologists' automatic word association between "gadget" and "BlackBerry"? After all, the word "gadget" produced almost as many search results as the word "bread" (274 million), suggesting that to some their various forms of gadgets are all necessities. There are even Web sites dedicated to gadgets, including www.gadget.com and www.mrgadget.com, and New York Times technology columnist David Pogue recently observed that his annual gadget list was, to his surprise, such a big hit.

We know people (OK, men) who rave about their cars, their space pens, their apple-corer-peelers (OK, New Men) and their spiked shoes to aerate the lawn. Some of our bankers, when pushed, recalled with fondness high-tech lawn mowers, stereo equipment or that ultimate boy's toy, the speedboat. Yet eight out of 10 cited the BlackBerry, typically for work more than pleasure. The iPod was the dominant response for pleasure, mentioned by five respondents.

The other Freudian aspect of bank CIOs' relationship with gadgets is that it's love-hate. Some noted the "Crackberry" culture and always being at the end of their electronic tether (albeit not having to spend such long hours in the office). Others noted that technology is less romantic when it's your livelihood, not just your hobby.

Anita Sands
"It's probably mundane to say that my iPod is my favorite gadget -- in close competition with my BlackBerry," Sands says. (A "fairly avid musician" and U2 fan, Sands holds a diploma in piano from the London School of Music -- as if her Ph.D. in physics and master's in management weren't enough!)

Ed Mulligan
"I'm really not into gadgets. ... I have a lot of gadgets -- big machines -- that I have to be responsible for," Mulligan says.

Still, when pressed, the first gadget that comes to Mulligan's mind is his BlackBerry. "It allows me to keep up with information 24x7 -- things happening in other parts of the world -- which is important when you're managing a global enterprise. And it allows everyone to be more flexible about their work hours."

And for fun? "My iPod. It makes sure I don't find myself on a plane watching some lousy movie," Mulligan explains, adding, "I'm a big home theater buff." 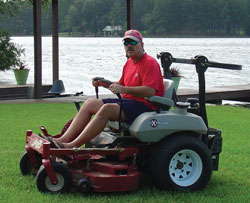 Dave McLeod´s Lawnmower
Dave McLeod
"My favorite? Probably my BlackBerry. I have grown to the point where I cannot live without it, which is not uncommon nowadays. It has freed up a lot of time."

McLeod's second-favorite gadget is one that drowns out the insistent call of his first. His "zero-turn lawn mower can turn, literally, on a dime," he says. "With most lawn mowers you have to make a circle to turn." He adds, "The noise is nice, and it gets me away from everything. I do a lot of lawn work."