50%
Tweet
The continuing uncertainty about financial services regulation will complicate 2010 IT budgeting by forcing banks to try to balance caution with innovation and efficiency with flexibility.

The best-laid plans of mice and men often go awry. The phrase from 18th-century poet Robert Burns couldn't be more fitting than when applied to the technology budgets that banks had established for 2009. Nonetheless, as 2010 approaches banks still must try to determine their IT spending plans for the coming year.

Bank executives are undoubtedly anxious to put 2009 behind them. To say the industry was derailed by the credit crisis and the ensuing fallout is an understatement.

Granted, budgets are never quite set in stone. But there was a great deal of regrouping among financial institutions in the past 12 months as they tried to adjust to a marketplace and regulatory environment that was -- and still is -- in constant flux.

"All the banks were caught off guard [by the severity of the crisis]," says Bruce Livesay, CIO with Memphis-based First Horizon National ($26.5 billion in assets). Adds Douglas Johnson, VP of risk management policy with the Washington, D.C.-based American Bankers Association, "Banks had to change gears because what they originally budgeted for and what they had to spend were very different."

According to Bill Bradway, founder of Boston-based Bradway Research, "2009 was almost like The Year Without a Budget. A meaningful portion of the industry -- 25 percent -- lost money. Management in this kind of turmoil marks time with a short-term outlook. There's a reluctance to commit to incremental new spending. Now it's about reducing expenses and preserving capital."

As a result, innovation is likely to suffer in 2010, most observers agree. But Francisco DeArmas, EVP and CIO - operations and technology with New Orleans-based Whitney National Bank ($12 billion in assets) insists that innovation must be viewed in a new light. "I don't think innovation will be shoved aside," he explains. "But you will have to be more innovative in how you're innovating. In other words, innovation will involve using your existing resources the best you can."

Jeanne Capachin, research VP, global banking and insurance practices, with Framingham, Mass.-based Financial Insights, says, "2009 was a time of extreme crisis that paralyzed the industry. We're getting past that now, so we do feel like we can spend. But it will be nothing like in the past." Financial Insights will release its 2010 bank IT spending forecast in January, but preliminary figures show that IT spending will be down 1 percent to 2 percent for next year compared to 2009, Capachin reveals. 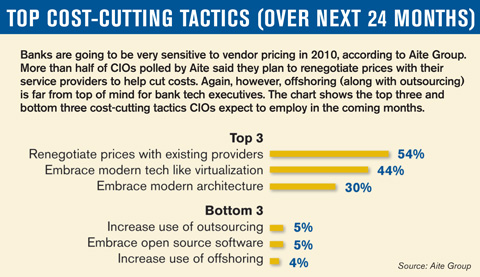 As banks allot their IT dollars for 2010, flexibility will remain a key strategy. But Celent (Boston) senior analyst Jacob Jegher notes that this isn't new for banks, especially when it comes to compliance. "Some things pop up that banks don't really account for at first," he says. "Look at the FFIEC two-factor security compliance guidelines [for online authentication]: Did banks have a budget for this in place? No. Did they create a budget for it? Yes. Today we're in a similar situation but just on a larger scale."

Still, it is difficult for banks to plan when so much is "up in the air," particularly regarding regulation, says Financial Insights' Capachin. "There's not a lot of good information out there," she points out. "No one is able to make any big decisions yet."

The ABA's Johnson stresses that, "We know neither the regulatory costs nor who will be regulating us." (For more on how regulatory developments in 2010 will impact IT spending, see Deloitte & Touche's forecast, page 24.)

Whitney National Bank's DeArmas, a 2009 BS&T Elite 8 honoree, says regulation is the top question mark in his budget. "We think we know what [Washington] may want, but then ... things go in another direction," he says. "We just have to prepare for where we think things are going and hope we have enough time to change."