Banks that offshore must commit to the strategy fully; otherwise, cost and process efficiencies will be negated, according to a recent study by New York-based Deloitte Touche Tohmatsu (DTT). Despite the growth of offshoring -- DTT reports that 70 percent of financial institutions offshore, up from 26 percent in 2003 -- companies capture less than one-third of the potential cost savings that it offers, the study asserts.

"Those [banks] offshoring without total conviction don't get the cost savings or levels of quality that they would if they did so at a more serious level," says Chris Gentle, a London-based director of Deloitte Research and author of Deloitte's 2005 Global Offshoring Study. "The message is clear: Don't dabble. Stay home if you're not committed."

On average, survey respondents report that 3.5 percent of their global head count is based offshore. But the most effective offshore operations, according to DTT, are those with 6.7 percent of their workforces located offshore. If all 62 financial institutions that were surveyed were to offshore that portion of their head counts, the collective annual cost base would be reduced by $16 billion, more than tripling the current reported savings of $5 billion, DTT contends. 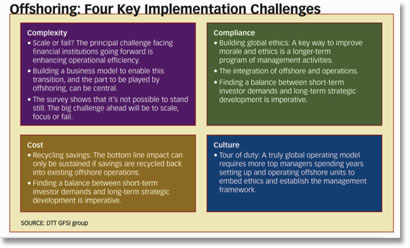 Of course, cost plays a huge role in the decision to offshore. But, as banks realize the caliber of the work available overseas, offshoring is changing from a low-cost, low-value strategy to a low-cost, high-value strategy, Gentle says.

Still, IT and back-office functions are moved offshore more than any other operation, DTT reports. In fact, "Forty to 50 percent of banks' IT is offshored," notes Gentle. But more than 75 percent of offshore staff does not interact with customers, and spending on front-office activities such as call centers constitutes only 12 percent of offshore spending.

Yet offshoring is not right for all banks, warns Gentle. The practice makes more sense for large institutions since they have the scale to do well, he says. Small companies lack the scale to make offshoring worthwhile and may be placed at a competitive disadvantage in the long run, Gentle suggests. "[Offshoring] is unleashing quite a potent competitive dynamic between large and small banks," he says. --Maria Bruno-Britz