50%
Tweet
Bank technology professionals who survived the turmoil of the past few years are about to be rewarded with compensation increases over 2009 levels. An exclusive 2010 InformationWeek Analytics survey breaks down the industry's IT salary trends.

For those who stayed fully employed during the economic downturn, the IT job market looks downright rosy. "Compensation for the people who survived will increase perhaps 5 percent to 10 percent over 2009 levels," predicts Shawn Banerji, an executive recruiter with Russell Reynolds Associates in New York. "For technology and operations executives who are still in the saddle working, their total compensation is maybe 20 percent off what it was, but they'll be able to pick up that 20 percent down the road."

IT professionals are able to play catch-up because many financial institutions have offered deferred compensation to soften the blow of recent pay and bonus cuts, keeping key people on board through what all involved hoped would be a short-lived downturn, according to Banerji. Nevertheless, deferred compensation also means that companies that want to poach top talent have to flash the cash.

"We had companies recruiting in 2009 that thought they'd be able to secure a relative bargain," says Banerji. "But for the people who have been continually working on Wall Street, you can't get them at Syms or Men's Warehouse prices -- you still have to pay full-ticket Madison Avenue for these folks."

On the other hand, out-of-work financial IT professionals have been more likely to take any reasonable offer. "For the first time ever, there were quite qualified people who were out of work that we could tap into," relates Banerji. "Many of them were happy to be working again, and their expectations around compensation were dramatically different."

According to InformationWeek Analytics' annual IT Salary Survey, which queried more than 2,000 banking and securities IT professionals, staff salaries in the banking and securities industries range from $60,000 for general IT positions to more than $100,000 for project leaders and systems architects. Bonuses tend to rise in proportion with base salary -- not just in absolute terms but also as a percentage of total compensation. In fact, systems analysts earned a median $10,000 bonus on an $83,000 salary, making this position one of the most bonus-dependent IT staff jobs.

SIDE-BY-SIDE WITH THE BUSINESS

Perhaps the biggest positive change about working in IT at banks these days is that it's no longer considered a back-office sideshow. "From being an out-of-sight, out-of-mind cost center -- an enigmatic and perhaps necessary evil -- IT has transcended into a critical business function," says Banerji. "In many cases, you're seeing [IT] side-by-side with the users."

However, the InformationWeek Analytics survey revealed that only 29 percent of IT staff and 48 percent of IT management currently maintain formal responsibilities outside of IT, such as developing new financial products or managing budgets. For these cross-trained professionals, the most common responsibilities are in product development and finance.

For IT managers, "aligning business and technology goals" was rated the most critical skill (87 percent), followed by "collaborating with internal stakeholders" (70 percent). After that, it's "building vendor relationships" (63 percent) and "managing vendors" (62 percent). 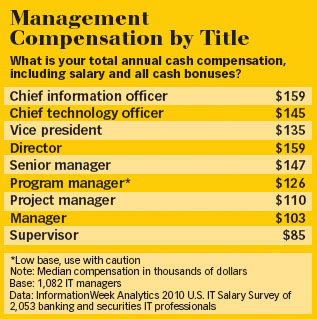 These skills speak to the continued importance in the financial services industry of outsourcing and partnerships -- whether it's to a service bureau providing specialized services, or to a full-service IT and business process outsourcing firm. While this global shift has increased the level of competition across many fields within IT and bank operations, it has also led to new career opportunities for some.