50%
Tweet
According to Aite Group's Nick Holland, the recent rapid growth of U.S. subscribers to mobile banking services is part of a transformation that eventually will place mobile phones at the heart of all forms of banking transactions, including payments.

In August 2007, Aite Group published a forecast for mobile banking adoption, anticipating that by the end of the year, there would be more than 1.6 million users of mobile banking services in the United States. With little available data published by financial institutions, the forecast was generally assessed as being overly optimistic.

However, in November 2007, Bank of America announced it had more than half-a-million subscribers to its mobile banking service. Given the number of other institutions that have launched mobile banking services in 2007, the forecast appeared to be not just realistic, but possibly even understated.

This anecdote has an important message - given the mass adoption of mobile devices, uptake levels can radically exceed expectations. In the U.S., mobile subscriber penetration has reached more than 80 percent of the population and is set to rise to more than 90 percent within the next four years. Even a relatively muted uptake of mobile banking services among mobile subscribers can result in impressive numbers. In fact, reaching the first million mobile banking users has not proven difficult:

•Users of mobile banking services are typically "power-users" of other mobile data services. With pre-existing familiarity, there was likely to have been little barrier to uptake. ,

•At this time, mobile banking services provide much the same information as can be accessed via online banking or an ATM, such as account balances, last five transactions or the ability to transfer funds between existing accounts. Mobile banking services have been designed to be reassuringly safe in order to build trust and encourage adoption. 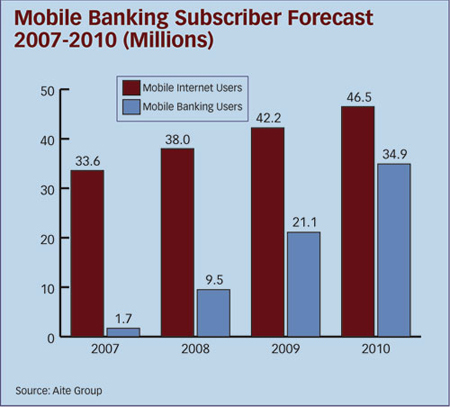 However, mobile banking is not being considered as the end of the road, but the start of a journey that will, if all goes well, place mobile phones at the heart of all forms of transactions. An Aite Group survey of mobile banking vendors highlights that all current-generation services were designed to support a swath of additional services, including contactless NFC (near field communication) functionality, over-the-air issuance of credit and debit cards, location-based marketing, and mobile commerce. While there will be a learning curve for end users when it comes to mobile transaction services that require a perception shift of the mobile device from something-you-talk-on to something-you-shop-with, the key element that needs cultivation is trust.

For stakeholders, the issue lies in the fine line between educating and terrifying the end user. The low-hanging fruit for mobile banking is far from being picked, but the real task will come in transitioning to mobile payments.