Tweet
To help keep meet some of the new challenges facing Zions Bancorporation, EVP and CIO Joe Reilly and his team have embarked on several key initiatives, including plans to improve time to market and agility, to modernize Zions' core banking system, to invest in data management, and to develop a cohesive payments strategy that would span payments types and lines of business.

For Joe Reilly, EVP and CIO at Zions Bancorporation, running the Salt Lake City-based bank holding company's IT department is a bit of a different challenge than many of his peers experience. Instead of managing the technology operations at one financial institution, Reilly must oversee Zions' eight affiliate banks in 10 western and southwestern United States. But he wouldn't have it any other way.

What do the visionary bankers represented among Bank Systems & Technology's 2012 Elite think the future of the industry will be like and what are their strategies to enable their IT organizations to respond to these trends? In this interactive session, live from BS&T's Executive Summit in Phoenix on Tuesday, October 2, we ask Elite 8 honorees to analyze the future of the banking IT organization, the role of the CIO, and more. Register for this live simulcast, sponsored by Thunderhead.com and tune in on Tuesday, October 2, (12:15 p.m. ET/ 11:15 a.m. CT/10:15 a.m. MT/ 9:15 a.m. PT.

"It's a collection of great banks," says Reilly, who assumed the CIO position at Zions in July 2011. "Our banks are separately chartered and branded so they enjoy the strong local image of a community bank, but our services company offers them the architecture of a much larger bank. The concept is simple, but the execution can be difficult and more challenging."

According to Reilly, the CIO role at Zions ($53.4 billion in assets) has changed over time. "Ten years ago our immediate focus was on operations excellence," he says, including projects such as making "catch-up" infrastructure investments and focusing on change management and incident management. As a result of this focus on operations excellence, the bank was able to reduce the frequency of high-impact incidents in its production environment by more than 180 percent, Reilly reports.

"We got that operational stability in place, and then our focus moved from IT infrastructure to the application portfolio, where we have the opportunity to create business value," he explains. "In the course of that evolution, we went from a traditional internal IT engagement model -- you might refer to it as an order-taker model -- to one that's closer to that of external service provider. We've become more like a product and services company"

That transition was necessary to best serve Zions' eight distinct affiliate banks, says Reilly. But the new service model requires new capabilities. "We now need to have industry insight and thought leadership," he adds. "We need product management expertise from a systems perspective, and relationship skills to work with our affiliate banks."

In general, at both Zions and in the banking industry at large, Reilly believes, IT has assumed a more strategic role within the organization. "It's a role that has evolved," he says. "It now has more of a prominent business focus." As an indication of this newfound influence, Reilly points to new enterprise challenges faced by banks, including the pressure on traditional revenue streams, the rise and influence of social media, intensifying regulatory requirements, the consumerization of IT, and threats of disintermediation from nontraditional institutions. IT, he notes, plays a critical role on each of those fronts.

To help meet some of these new challenges, Reilly and his team have embarked on several key initiatives, including plans to improve time to market and agility, to modernize Zions' core banking system, to invest in data management, and to develop a cohesive payments strategy that would span payments types and lines of business. "We have to keep our finger on the pulse and understand what's happening in the industry," he says.

A large part of that, according to Reilly, entails keeping track of market forces that are playing a role in redefining the industry, particularly as historical revenue streams for banks dwindle. "You talk about things like the social consumerization of IT, changing demographics and the threat of disintermediation [from non-traditional financial institutions] -- we have to pay close attention to all these things," he says.

Modern to the Core

Though he assumed the role of CIO a little more than a year ago, Reilly already has driven several projects that are integral to Zions' future, none bigger than the bank's ambitious project to replace its core systems. Zions sees the value of approaching this project boldly and with a vision for the future, he says. "We believe we need to modernize our systems, and we have been evaluating options over the past couple of years," Reilly explains.

While he can't provide specifics, as the bank is finalizing a deal to choose a core provider, Reilly says Zions is looking to implement a modern, integrated core. From a tech perspective, he indicates, that means having an integrated, robust, customer-centric data model; a platform that is architected from an SOA perspective from the ground up; a set of common services across deposits and loans; and a real-time system capable of straight-through processing. All of this would result in business benefits such as improvements in back-office efficiency, he says.

Another important IT project involves upgrading the corporation's online and mobile banking platforms. Reilly says Zions looks at mobile a bit differently because, "Most of our banks would call themselves commercial banks more than retail banks, though we do have retail bank lines of business." As such, many of the companies' customers tend to be middle-market corporate and small businesses. Still, Reilly says, Zions is making a "vigorous investment" to meet the mobile banking needs of its commercial customers, where, he says, the demand for mobile focuses on business functions such as authorizations.

On the consumer mobile banking side, Reilly notes, Zions has tried to be a "fast follower," remaining very aware of what the major large national banks are doing. But Zions also is focused on creating a holistic channel strategy, of which mobile is a key part, he adds. "We are looking to be more customer-centric and less product-centric and have a cohesive strategy that encompasses all of our channels," Reilly says. 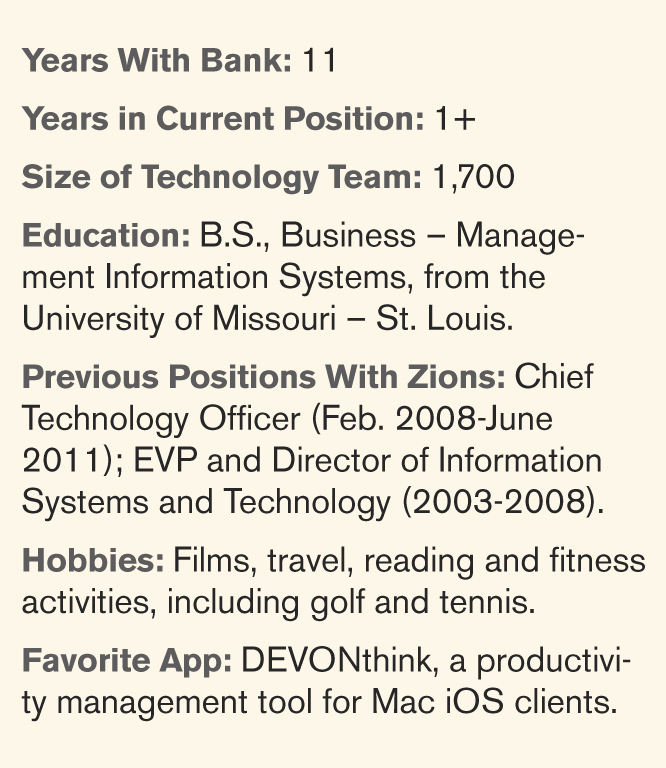 As part of that strategy, Zions currently is implementing an "up-to-date, simplified and standardized online platform" that will be rolled out later this year, Reilly reports. That rollout, he says, will position the holding company "to stay closer to the leaders" in the online banking space.

Additionally, Reilly says, Zions is investing in big data and customer channel management solutions. Meanwhile, IT increasingly is involved in helping the bank meet compliance requirements and manage risk while improving time to market and agility. "That's a challenge I think about all the time," Reilly says of navigating the regulatory waters. Even though the "heavy lifting" for regulatory compliance is done by other teams, such as corporate accounting, "The velocity of regulatory changes means you always have to be aware of what's going on," he adds, and IT has an important role to play.

In fact, Reilly says, throughout his more than 10 years with Zions -- during which he has held various positions, including chief technology officer, with responsibility for major IT decisions -- he has seen the role of technology grow in importance in the banking industry. If banks are going to continue to thrive over the next decade and beyond, he suggests, they will need to focus on technology and "innovative experimentation," and the CIO will need to be a primary driver in that push.

Fortunately, Reilly believes, the banking industry will be able to attract the tech talent needed to make that happen. "Our industry is one of a few verticals that places such a high value on technology and that is attractive to skilled technical workers," he insists. And Zions is well-positioned to attract the best of the best, due in no small part to its location in Salt Lake City, which has "undergone a sort of tech renaissance," Reilly says. "I'm confident we can attract top talent to our organization," he announces. "We have worked very hard to create a collaborative working environment, where people are valued above all else."