Even before $2 million flowed out of big banks and brokerages operating in Texas and into First National Bank of Bosque County ($97 million in assets), the community bank was emphasizing its trustworthiness in ads celebrating its centennial. "We've been emphasizing trust a lot," says Brent Rickels, the bank's SVP, adding, "We'll be here" for the long haul. The ad for the Valley Mills bank depicted here stresses its FDIC backing, represented by the bald eagle; its five-star rating (from independent agency BankStars.com); and its 100-year history. 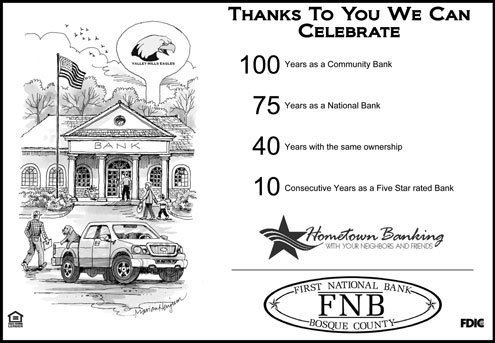 "Look at the change in bank ads in the past four to six weeks," Ed Kountz, a senior financial services analyst with Forrester Research (Cambridge, Mass.), told the audience at Finovate, a biannual showcase for new online banking applications, held Oct. 14 in New York. "They're all talking about trust." A theme of many applications at the event was the need for consumers to take their money management into their own hands, rather than blindly entrust it to an institution.