50%
Tweet
An Ernst & Young Survey of nearly 30,000 bank customers found they switch banks more, and expect to be rewarded for their loyalty. 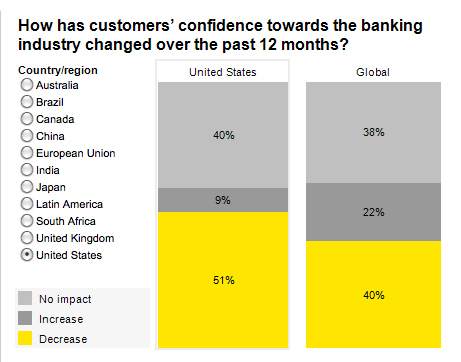 According to Ernst & Young's 2012 global consumer banking survey, retail bank customers are taking control of their banking relationship more than ever before. The study, which questioned 28,560 banking customers across 35 countries, highlights how customers expect to be financially rewarded for their loyalty. According to the survey, the percentage of customers planning to change their banks has almost doubled in the past year, while 91 percent of consumers expect to receive financial rewards if they do remain loyal to their banks. Here are some additional findings from the report.

More than half of the U.S. respondents to the study indicated their confidence in the banking industry has waned in the past 12 months. Confidence levels fell in all European countries from last year, particularly the countries heavily impacted by the financial crisis.