50%
Tweet
When it comes to identifying potential geographic markets for growth and investment, banks have been focusing on the prominent BRIC nations: Brazil, Russia, India and China. While these four countries are attractive to financial services organizations seeking new opportunities to grow, global financial services growth opportunities need not be limited to the BRICs. BS&T explores growth beyond the BRICs, with snapshots of other hot banking markets in Latin America, Hong Kong and South Korea

When it comes to identifying potential geographic markets for growth and investment, banks and technology companies alike have been focusing on the prominent BRIC nations: Brazil, Russia, India and China. While these four dominant countries have populations, economies, infrastructures and cultures that are attractive to financial services organizations seeking new opportunities to grow beyond their local bases, it may be increasingly difficult for outside players to differentiate themselves as the competition accelerates.

Fortunately, global financial services growth opportunities need not be limited to the BRICs -- there are other strong markets in these regions where both local and foreign banks are making investments in everything from core systems to payments infrastructure to mobile platforms in order to capitalize on underserved customer segments (whether the truly unbanked or a growing middle/upper class). None of these markets promise opportunity without risk, however, and the winning players will have to balance their investments in growth with a strong capability to address local regulatory and security complexities. BS&T explores growth beyond the BRICs with snapshots of other hot banking markets in Latin America, Hong Kong and South Korea, and Central and Eastern Europe. 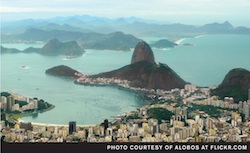 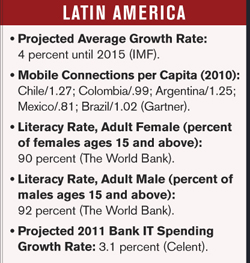 With a history of financial crisis behind them, financial institutions in Latin America are accustomed to coping with economic turmoil. As it turns out, the 2009 recession and financial crisis had less impact on the Latin American nations than on many other countries, and many banks in the region are now looking to capitalize on the weaknesses of their European and U.S.-based competitors that are scaling back global operations.

"Latin American financial conditions in general are very strong," reports Rene Salazar, Mexico City-based director for Latin America, the Caribbean and Canada, Fiserv International. "They have been preparing themselves for crisis cycles -- maybe even better than some of the European banks."

Obviously such a large region is very diverse, with as many differences as similarities. However, according to a 2011 regional update from the World Bank, common challenges include a large number of poor people, an "historic" infrastructure gap and a need to invest in human capital to stimulate competitiveness. Those extremes may represent the key to banks' growth strategies in Latin America, suggests Salazar.

"The underbanked and unbanked markets represent a large opportunity in Latin America," he says. "It's rather difficult to serve that market, but when financial institutions find the right balance between the services offered and the fees associated with them, as well as the risk management [and regulatory considerations] ... the results have been extraordinary."

A key area of investment for institutions trying to reach this market is in mobile banking and related applications. Pyramid Research forecasts that mobile banking usage in Latin America will grow from the current estimated 18 million mobile banking users to more than 140 million by 2015. According to a recent report from Deloitte, "Going mobile may increase banks' opportunities to unlock the inherent potential of the region. Through mobile banking, innovative leaders in this space can capitalize on growing income and widespread mobile ownership to drive new revenue streams, boost operational efficiencies and enhance customer experience."

There's also an opportunity to develop more targeted and profitable banking products for the large middle class customer segment in many Latin American markets. Banks traditionally have tried to attract these customers by offering very low rates, Fiserv's Salazar relates. "The challenge is to retain those customers," he says, since they are liable to switch banks again when the rates inevitably go up. This is starting to drive bank interest in CRM tools and other solutions that can improve customer experience and loyalty, he reports.

Online banking is extremely popular in Latin America -- Brazil and Argentina reportedly have the highest percentage of online banking activity in the world. Unfortunately, this also means that occurrences of cybercrime and hacks are on the rise. In January hackers affiliated with the Anonymous collective successfully launched denial-of-services attacks on a number of Brazilian banks, including Banco de Brasil, Banco Bradesco, HSBC and Itau Unibanco Banco Multiplo.

In general, Latin America is considered to be a haven for cybercrime operations and the creation of malware, according to a report from BS&T sibling brand Dark Reading, which notes that one out of 20 machines in Brazil was infected with some kind of banking Trojan last year. Accordingly, risk and compliance is another focus of IT-related investment by Latin American banks, especially around the areas of anti-money laundering, fraud prevention and PCI compliance, Salazar says. --Kathy Burger