50%
Tweet
All has changed, utterly changed, to paraphrase Yeats. Major mergers, a decline in consumer trust and the prospect of increased regulation are sure to influence banks' technology spending for the foreseeable future.

"What's the capital of Iceland? ... One pound-fifty," quipped a financial consultant BS&T met at a conference in mid-October. For the Briton, though, it wasn't really a laughing matter, as his wife was 25,000 pounds sterling (US$43,250) out of pocket since an Icelandic bank with which she had an online savings account was gone, Iceland's government unable to meet its guarantee to insure deposits and the U.K. government suing the Icelandic government.

Yes, it's been some month or two: a Western, democratic country going bankrupt (Iceland); the U.S. national debt clock in Times Square running out of digits; the Dow losing $1.2 trillion in a day; the disappearance of Wall Street as we know it; more failures of banking monoliths worldwide; the U.S. and U.K. governments taking part ownership of failing banks; and unprecedented concerted action by central banks worldwide to stop the chaos -- all of which provides some flavor of the financial times.

"Europe may enter recession before the U.S.," says Austin Hughes, chief economist with Dublin-based IIB Bank, a unit of top 50 global bank KCB Bank (Brussels; US$422 billion in assets). According to an October 15 BBC report, U.K. unemployment hit an eight-year high in August. 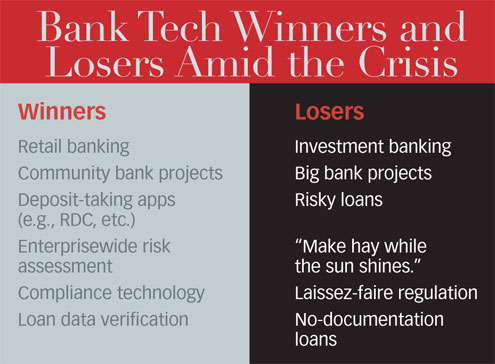 Clearly no one will remain unaffected by the crisis. How banks fare, and how their technology budgets will be shaped, depend partly on the new competitive landscape.

U.S. banking is beginning to resemble a barbell, with only the extremes of big and small banks, notes Tom Kelly, a spokesman for New York-based JPMorgan Chase ($1.6 trillion in assets), the new owner of Washington Mutual (Seattle; $327 billion in assets). Speaking before Wells Fargo won Wachovia ($1.4 trillion in combined assets), Kelly told BS&T, "If you look at Citi and Wachovia, us and WaMu, and Bank of America and Merrill [$2.5 trillion in combined assets], there's going to be three companies with 4,500 to 6,000 branches each, Wells with more than 3,000, then those with 2,000 or fewer."

Those institutions are among the nine top banks in which the U.S. government will take an ownership stake in return for funding; the others are The Bank of New York Mellon ($205 billion in assets), State Street ($154.4 billion in assets), Goldman Sachs ($1.08 trillion in assets) and Morgan Stanley ($722 billion in assets). All but Bank of New York Mellon and State Street are also on the list of top 10 financial market players in the U.S. that collectively lost $460 billion, or 54 percent of their market capitalization, between Jan. 1 and Oct. 10 of this year, says Larry Tabb, CEO of Westborough, Mass.-based research and consulting firm TABB Group. Such global behemoths were the most likely investors in failed complex investments and so are the worst-hit by the crisis.