According to Kathleen Khirallah, lead analyst for retail banking with TowerGroup (Needham, Mass.), the industry should expect another round of the government-imposed examinations. However, next time, it won’t be as public and will move down the banking food chain to smaller and smaller institutions.

The “big 19” banks tested in this first round by regulators were the ones considered too big to fail (over $100 billion in assets). The goal was to see how they would fare over a two-year period during a severe, prolonged economic downturn. Three indicators of economic distress were used: gross domestic product, civilian unemployment rate and house prices. They measured an average baseline and an alternate “more adverse” ratio. Other factors were taken into consideration in the stress tests, such as consumer loans, securities and FAS 140.

"[FAS 140] is the mark-to-market rule," Khirallah told listeners during a webinar held Thursday. "This was changed in the middle of the stress tests. Banks were told they could use the new mark to market rule for their average baseline and the old market-to-market rule for the more adverse reading. This was an interesting fudge by the regulators."

She said when the numbers for the three main indicators were proposed in February by the regulators, they were generally considered good estimates of how the banks should perform. However, the economy continued to deteriorate. The results of updated economic figures were even worse than the proposed alternative more adverse indicators the regulators had the banks use.

For example, figures used for the GDP reading for 2009 showed a 2 percent decrease for the baseline and 3.3 percent decrease for the adverse reading. However, when economic figures were updated, it showed the GDP was actually down over 6 percent in the first quarter -- significantly worse than the alternative more adverse ratio, Khirallah commented. 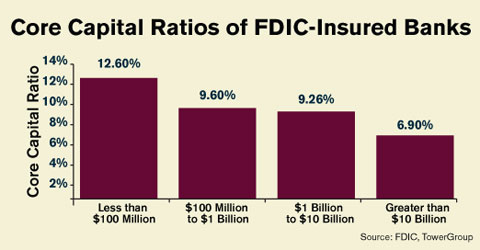 However, now that the results for the top 19 financial institutions have been made public, Khirallah said it’s time to look ahead. "The challenge with the stress tests is to think of how to use them in a practical manner on an ongoing basis," she said.

Ten banks were singled out as "troubled' once the stress tests were complete. They now must find ways to shore up their capital reserves. However, this doesn’t mean the remaining nine banks that "passed" the stress tests are out of the woods either. "It's not business as usual for them," she said. "There are continuing concerns with regard to the economy and performance of their portfolios. All 19 banks will need to be much sharper in their ability to execute and more defensive in how they manage their balance sheets."

Not being labeled too big to fail is by no means an exemption for the nation’s remaining 8,000 plus banks. Although figures on the core capital ratios of FDIC-insured banks from last December showed smaller banks with stronger capital positions than larger banks (12.6 percent versus 6.9 percent, respectively), Khirallah said this disparity will not last. There will be a continued erosion of the portfolios of midtier banks. She predicts that in 12 to 18 months, the portfolios of smaller banks will be hit. Therefore, the challenge for the regulators will be to put out of the fires at the big banks while then circling back and handling the smaller banks. "The regulators must keep their fingers on the pulse of all banks," she said. "If banks just under the $100 billion asset point were to fail, that would create the same kind of catastrophe as if one of the largest ones failed."

In the end, Khirallah acknowledged that regulatory reform is needed for the industry. This, she said, should consist of rationalizing the roles and responsibilities of the nation’s bank regulators, perhaps moving to a single regulator as is being floated by treasury secretary Tim Geithner; a mandate for concise, reasonable regulation; and the need for U.S. regulators to participate in global reform to deal with these issues together.

"Banks will continue to perform stress tests on their own regardless of the regulators," she noted. "It's sound business practice. Future stress tests may not be as publicized as this first one, but more banks must be added to the pool."