50%
Tweet
With mobile banking on the rise in the U.S., institutions still are challenged to find the best operating model.

Industry analysts don't always agree, but if there's one area in which there is consensus, it's around the growing importance and popularity of mobile financial services in the United States. Granted, the U.S. market was a bit late to the party, but the past year has shown that the U.S. financial services and telecom industries are making long-overdue progress toward establishing a mobile banking and payments environment.

Bob Egan, chief analyst with TowerGroup, says the rate of adoption of mobile banking certainly has outstripped the Needham, Mass.-based firm's initial predictions. "When we started building our mobile banking forecast in May, our most optimistic scenario for m-banking subscribers by the end of 2007 was about 400,000 users," Egan offers. "But as we continued to collect the data, it became clear that at the end of the year, we were going to end up with twice our initial expectations. There are close to 1 million m-banking users in the U.S. Bank of America alone has more than half a million subscribers."

Pleasanton, Calif.-based Javelin Strategy & Research still was working on its own m-banking forecast at press time, but analyst Bruce Cundiff says there's a definite upward trend in the space. "The level of sophistication of the devices and the readiness of a larger percentage of the consumer population to engage in mobile definitely took it over the hump," he observes. "A number of [financial institutions] are going at this with gusto."

According to Ginger Schmeltzer, a manager with consultancy Edgar Dunn & Co. (San Francisco), however, the mobile space is shaping up differently in the U.S. than abroad. "In the U.S., the buzz is around m-banking, while overseas it's more around m-payments," Schmeltzer explains. "It's definitely catching on faster from the banks' perspective, but from the consumer perspective, it's moving more at pace. Some consumers don't even know what m-banking is, so it's still a push product for the banks now."

Schmeltzer stresses that mobile banking and mobile payments, although closely related, are not quite the same. "It's a very fine line," she says. "If you look at this as a way to access your account for information, that's m-banking. Once you start transacting with those funds, it becomes payments. Most banks and service providers are using m-banking as a stepping stone to m-payments. The end goal is to get into payments."

Though mobile banking will be an important service for financial institutions to offer customers, it's the payments side where they'll make money, adds TowerGroup's Egan. "The challenge is to make mobile a sustainable channel where banks can also generate some revenue," he says. "Millions of people have mobile phones, so banks are pretty sure they can make some money here. However, with payments, it's about interchange and transaction fees. This is more familiar territory for banks." 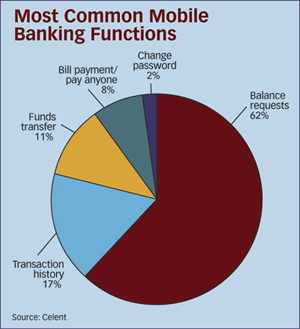 Javelin's Cundiff agrees that payments is where the money is. "The opportunity is more dollar-oriented when you're dealing with payments because of the associated revenue streams that you don't get with m-banking," he explains. "We've proven that you can't charge for a channel, as the industry discovered with online banking. So m-banking will be more like a service used to enhance the customer relationship than one that will bring in revenue for banks."