50%
Tweet
The writings of Alan F. Westin, a legal scholar and expert on privacy who died recently, raise important questions for banks and other businesses seeking to capitalize on big data.

Big data may have become the catchphrase du jour, but concerns about data -- how to gather and organize it, how to extract meaning and value from it, and how to protect it -- have been around for decades, if not longer. 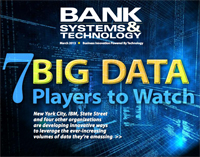 Today, with data volumes exploding and with banks, other industries, governments and rogues all trying to deploy increasingly sophisticated technologies to capitalize on that information, it's appropriate to take a moment to acknowledge the contributions of Alan F. Westin.

Westin, a professor of public law and government at Columbia University for 37 years who died Feb. 18 at the age of 83, was a scholar of privacy. He pioneered the study of what privacy means in modern society and how information technology is influencing our actions around privacy.

According to an obituary that appeared in The Washington Post, "Privacy, Dr. Westin essentially argued, is more than the right to be left alone. It is the ability to control how much information about ourselves we reveal to others, and how and when to share it. … Dr. Westin was cited as one of the first scholars to recognize the threats of modern technology and as one of the first to present a measured philosophy in a debate often charged with emotion and ideology."

Westin essentially launched this discipline in 1967 when he published Privacy And Freedom, a still-influential book that discussed surveillance techniques ranging from hidden microphones to computerized data collection. Westin wasn't anti-technology, but he raised alarms over the extent to which individuals are able to control and reveal data about themselves.

It has been said that in today's world of social media, next-best-offer online shopping and celebrity oversharing, concepts of privacy have changed. Some in the IT and marketing communities have suggested that younger consumers are willing to trade at least some personal privacy for better pricing, exclusive access or convenience -- a very compelling development for banks and other financial services providers looking for ways to attract new and more profitable customers. Banks can hardly afford to ignore this opportunity, especially as they face new competitors with business models based on the ability to mine increasingly precise customer data.

As Westin wrote, however, there are moral issues along with competitive considerations around the use of personal data. Banks are scrambling to hire professionals skilled in the disciplines related to big data. I wonder if they're prepared to add ethicists and philosophers to their teams as well.