50%
Tweet
Banks are reconsidering the role of branches, as big data insights continue to reshape bankers' understanding of their customers and the best way to serve and engage them.

That creaking sound you hear is a pendulum swinging -- the pendulum that represents how bankers think about their delivery channels, especially the branch. After a decade of aggressive branch investment and expansion, banks are scaling back the bricks and mortar. SunTrust Banks announced in March that it will close about 40 branches in the first quarter of 2013, following 43 closures in 2012. Bank of America is likely to close 750 branches in the next few years, with 16,000 related job cuts. Overall, U.S. banks closed more than 500 branches in the fourth quarter of 2012 while opening only 274, according to SNL Financial. 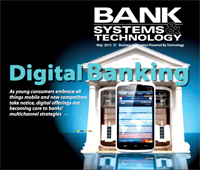 Digital BankingBank Systems & Technology's May issue looks at the strategies banks are using to expand their digital channels and attract a new generation of young and profitable customers. To read more, download our May 2013 digital issue now.

To some extent, the closures are cost-cutting moves, but they're also happening because digital channels no longer are alternative channels -- they're becoming dominant. How this transition is playing out and what it means for the customer experience are the focus of the May 2013 issue of Bank Systems & Technology.

The pendulum metaphor suggests that this isn't the first time that banks have reconsidered the role of branches. It wasn't all that long ago -- 15 years? -- that industry debates about the end of the branch were common. Back then, the Internet loomed as the great disintermediator. Branches were surely dead, experts declared. But things didn't play out as predicted by the most enthusiastic Web advocates (no doubt influenced by the dot-com crash at the turn of the century). Online didn't go away, of course, but branches came roaring back, and the first decade of the 21st century saw banks aggressively adding to their branch networks. Some of this activity has been through acquisitions and other deals, but a lot of it has been construction from scratch.

Now there's another retreat from branches. It's 2001 all over again, but with a twist. The multichannel tease of the late 1990s has become reality in 2013, with the online channel leading the way. Yet it's likely that it will be only a few years, at most, before mobile surpasses the Web as the consumer (and, potentially, corporate) channel of choice.

The branches that remain will likely provide a multimedia experience that would befuddle (or maybe bedazzle) the branch advocates of past eras. In fact, digital banking interactions are taking place in the branches, where advisers armed with tablets can quickly open accounts and high-net-worth clients can interact with a trust specialist via telepresence video. In a new report, Mercator Advisory Group calls this "omnichannel" banking, a shift from "traditional monochannel and multichannel views of the banking world."

It's unlikely the pendulum will ever swing back to a branch-centric model. But with big data insights reshaping bankers' understanding of their customers and cloud computing transforming operations, the conventional wisdom about the best way to serve and engage customers will continue to be a moving target.