50%
Tweet
With the new NCR Mobile Cash Withdrawal system, customers won't need to bring their debit cards next time they visit the ATM -- just their smartphones. 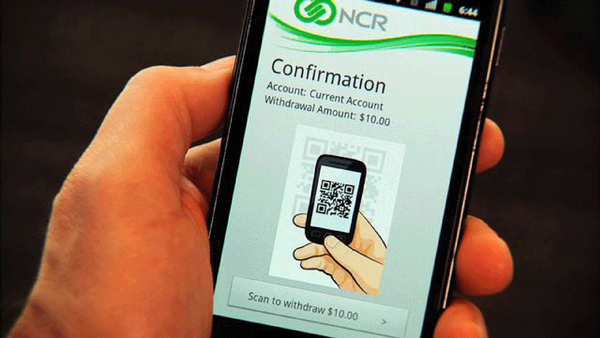 NCR Mobile Cash Withdrawal
NCR Mobile Cash Withdrawal, a new system developed by NCR (headquartered in Duluth, Ga.), seeks to update the ATM machine by combining a bank's mobile and ATM channels to deliver faster and more convenient cash withdrawals for customers. In addition to enhancing the functionality -- and value -- of the ATM itself, the new capabilities also potentially could help banks in their goals of creating an integrated multi-channel banking experience to improve customer loyalty and retention.

Customers using the system can start their ATM withdrawal transaction before they ever get to the ATM machine itself. Instead of swiping a debit card and entering a PIN, customers will open up their mobile banking app with the NCR Mobile Cash Withdrawal function and input the amount of their withdrawal. The information from the transaction is then stored on a cloud server, and customers can then go to any of their banks' participating ATM machines, open up their mobile banking app and scan a 2D barcode on the ATM's home screen to authorize the transaction and receive their withdrawal. Customers can get their money out of the ATM fewer than 10 seconds, according to NCR. After the transaction is completed an electronic receipt that can be stored for later reference is sent to the customer's mobile application.

Commenting on the potential for the new ATM's, Marc DeCastro, research director for consumer banking at IDC Financial Insights (based in Framingham, Mass.), declares, "I think it's terrific. This is exactly what financial institutions need to look at: integration of all the channels. And I think the ATM has really been left on the sidelines."

At a time when mobile is overtaking other channels, Decastro says, this technology could provide a way to keep the ATM relevant and keep customers coming back to the branch. "It's a way to get them [customers] back into the branch, where you can then grab their attention with an ad for a new service," Decastro explains.

Steve Nogalo, NCR
NCR is seeking financial institutions to partner with to pilot the new system. Steve Nogalo, the vice president and general manager of payments at NCR, says that the company is in talks with several potential partners for the pilot but was not ready yet to reveal those partners.

NCR will offer two different models of the system for the pilot, according to Nogalo. The first one is an NCR Mobile Cash Withdrawal function added to the bank's mobile application, and the second option is a standalone mobile application for the system itself. "We've been hearing the desire from banks for a seamless experience across all channels," Nogalo said. "We tried to design the system to minimize the impact on the system's environment. No new hardware is required; there is only a mobile app server to install."

Nogalo also emphasizes the benefit of added security that the system offers by bypassing most ATM scams. "This is eliminating the possibility of card skimming because the card isn't inserted into the device. The transaction is stored on the cloud and no consumer data is stored on the ATM," Nogalo explained. The cloud server for the system can be hosted in house by the bank or by NCR, Nogalo added.

IDC Financial Insights' Decastro agreed that the mobile withdrawal system would foil ATM scammers and would give banks the opportunity to keep a step ahead of fraudsters. His main concern about the system, he says, has to do with ease-of-use and how that might affect consumer adoption of the technology. It's important that educational materials for consumers are made readily available and banks might need to designate personnel to help customers with the system when it is introduced, he emphasizes.

Most importantly, Decastro says, banks will need to have more than one ATM in a branch that is using the technology. Otherwise they would risk a scenario of someone who can't figure out how to use the system holding up a long line at the branch's only ATM. That, he said, would only help kill the ATM.