50%
Tweet
Lingering obstacles related to security and functionality are all that stand in the way of widespread adoption of corporate mobile banking.

Though mobile has become an indispensable channel in banking, it hasn't quite become a "must-have" among corporate customers. 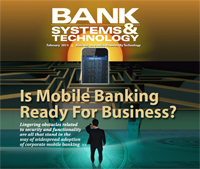 Part of that is because of the limited screen size of most smartphones; corporate treasurers need to access large amounts of information, which could prove inconvenient and awkward to display on such a small device.

The biggest concern, however, is security, experts say. Treasurers and business executives might love the convenience of smartphones in their daily lives, but given the sensitive nature of corporate data, every precaution must be taken to protect it.

But, as corporate bring-your-own-device policies evolve and banks put out more sophisticated corporate mobile offerings, it may only be a matter of time before there is a "mobile revolution" in the commercial space similar to what has transpired in consumer banking, say several industry veterans.

"There have been some hindrances to the adoption [of corporate mobile banking], but I think this technology is now growing rapidly and I think the adoption is not going to trickle in, but it's going to come in leaps and bounds as new innovations become launched," says James Gifas, executive VP, head of global transaction services solutions, U.S., for RBS Citizens Financial Group (Providence, R.I., $132 billion in total assets).

RBS Citizens is getting set to launch the next phase of its corporate mobile offering, accessMOBILE, which debuted in 2010 and is supported by iPhone, Android and BlackBerry devices. The app, built on the SAP/Sybase platform, currently gives corporate clients the ability to approve pending transactions, release wire transfers and view previous-day transactions, among other functions. The next generation of the bank's corporate mobile banking app will have more transactional capabilities, as well as informational ones, such as viewing account balance snapshots, a trend Gifas believes will spearhead the widespread adoption of corporate mobile banking, as more companies will want to take advantage of these capabilities.

"While corporate mobile banking was initially very information-oriented, now the trend is to be more action-oriented," he says.

RBS Citizens' corporate customers want to do more via mobile devices, Gifas says, and often they don't even need to be away from their desks to take advantage of mobile's convenience.

For example, Gifas says, if a financial executive is at his or her desk on a conference call and needs to approve a payment quickly, it's generally easier to log on to a mobile application and handle the approval that way than it is to go through an online portal.

"It's become more of an extension of their desktop," he says, noting that as more corporate customers use mobile because of its convenience, RBS Citizens' treasury solutions department makes it a priority to maintain communications with them -- such as by sending them "fraud packets" -- about best practices to prevent fraud and cybercrime.

Wells Fargo launched CEO Mobile, the mobile version of its Commercial Electronic Office online banking product for corporate customers, in 2007, prior even to the launch of the iPhone. While its initial functions were limited, CEO Mobile has been upgraded over the years, and users can now perform tasks such as making and approving payments, monitoring accounts and viewing reports, says Watson.

Which mobile services the bank's business customers use often depends on the size and scope of that business, Watson says. For example, she says, small-business customers have been much more inclined than large corporate customers to use the CEO Mobile remote deposit capture feature, launched in November 2011.

Watson also says a popular use of mobile for corporate treasurers is for wire approvals. In fact, she says Wells Fargo processed $17 billion in wire traffic in 2012 from the mobile channel, which is evidence that corporate treasurers are becoming more comfortable using mobile services.

"For them to find that useful is a great win for us," adds Watson.

Patricia McGinnis, director of the Commercial and Enterprise Payments Advisory Service at Boston-based research firm Mercator, says that while mobile banking for corporate customers "isn't anywhere near as far along" as on the retail side, "it's inevitable" that mobile will play a bigger role in business banking.

"There is this tension between what consumers are accustomed to as individuals and when they go to work," she says. "In their role as employees, they still have those devices in their pockets and their own experiential use in how they use them for personal reasons, and it typically drives them crazy that they can't get those same functions for work purposes."

That issue boils down to security, McGinnis says, as corporate IT departments continue to worry about securing their employees' mobile devices to protect the valuable data stored on them.

"The diversity of mobile personal devices introduces a new level of complexity for IT managers hoping to control and secure a bring-your-own-device [BYOD] environment," she says. "The company is leery of breaches that can occur via a mobile device, and on the other side, the bank doesn't necessarily want unlimited access to corporate accounts on mobile devices." This is especially risky since cybercriminals increasingly are targeting corporate accounts, and banks fear ultimately being held responsible for breaches, McGinnis notes.

Security concerns are among the chief reasons that mobile isn't as prevalent on the corporate side as on the retail end of business, says Colin Kerr, industry solutions manager for Redmond, Wash.-based Microsoft's worldwide financial services division.

"There is a vast difference in the nature of the transactions that a consumer would do and what someone in a corporate treasury environment would do," he says. "There needs to be a different experience."

Kerr says businesses are right to be concerned that mobile devices connected to corporate networks are protected and that they are making sure that the data is secured. As companies begin to have more robust and defined BYOD policies, the use of mobile devices in a corporate setting should rise, he says.