Tweet
U.S. Bank chief innovation officer for payment services Dominic Venturo understands the importance of cutting-edge technology to the bank customer experience. But he never loses sight of the importance of a good relationship, either.

As chief innovation officer for the payment services division at U.S. Bank, Dominic Venturo technically works for a product organization within the bank, but his job heavily integrates technology, he explains. "We get very involved in the technology of banking and payments," says Venturo, whose department sits within the payments services division at Minneapolis-based U.S. Bank.

What do the visionary bankers represented among Bank Systems & Technology's 2012 Elite think the future of the industry will be like and what are their strategies to enable their IT organizations to respond to these trends? In this interactive session, live from BS&T's Executive Summit in Phoenix on Tuesday, October 2, we ask Elite 8 honorees to analyze the future of the banking IT organization, the role of the CIO, and more. Register for this live simulcast, sponsored by Thunderhead.com and tune in on Tuesday, October 2, (12:15 p.m. ET/ 11:15 a.m. CT/10:15 a.m. MT/ 9:15 a.m. PT.

"Our charge is to work with and discover emerging technologies, trends, consumer behavior or business behavior problems and work to develop solutions to address these trends and issues," he adds. "As a result, we spend a lot of time in the mobile space and we work with a variety of our technology partners in the bank."

According to Venturo, technology pervades many parts of the bank outside of the IT organization. "Banking as a whole is a relationship business and a technology business. That is the core of what we do," he insists. Noting that the focus of his job is becoming more centered on the end user, Venturo describes his work as largely "software development," which, he says, has become increasingly important since the advent of mobile apps.

"All of those [new products] require new technologies, and in some cases technologies we haven't historically used, in order to be able to bring them to market," Venturo continues. "So we play a part in how all of that comes together. What we're working on for the front end becomes part of the longer-term planning in terms of how we're going to support that from an infrastructure and from a delivery perspective."

To generate new ideas, Venturo leads a team of 12 experts in various banking disciplines. "We sift through emerging trends and assess them, including technology trends and behavioral trends influenced by technology," he reports.

Obviously, the rise of smartphones and tablets is one of those trends, notes Venturo, not only from the perspective of customers interacting with banks in new delivery channels, but also from practical perspectives, such as how to best contact customers in a world where there's a decreasing number of physical landlines in homes. Especially for younger consumers, he says, "There's a delivery disconnect between how they experience the world and how we deliver that." In fact, Venturo asserts, mobile is quickly becoming more than another channel. "There are a lot of things enabled by the portable computing environment," he says. "Desktops are on the wane, and everything is kind of mobile. It just depends on how you define it.

"We have this amazing telecommunications infrastructure -- it seems like the Internet is like air," Venturo continues. "So what is mobile? Everything is always on and always connected. And if you go there, it really enables you to say, 'Well, I'm not really going to spend a lot of time thinking about what a mobile phone does now, but rather how our customers are going to interact with us any time, anywhere they are connected.' And that's how we are looking forward to the future of mobile."

One mobile capability that Venturo believes will help shape the future banking experience is location-based services. U.S. Bank ($353 billion in total assets) already has piloted a service that Venturo says is representative of how geo-location will be used in the future: The bank's in-house developed Find US+ application for the iPhone, based on what Venturo refers to as augmented reality, merges the real world with a digital experience. When pointed in a specific direction, he says, the phone displays a computer-generated graphic for each nearby branch or ATM location, including its address and distance based on the user's GPS location.

Each graphic is color-coded to reflect whether the location is open, closing in an hour or closed. The app even provides the best route to the branch and acknowledges when the user arrives, asking if additional information is requested. "Location is going to become a really big thing in commerce," Venturo says. "Banking will obviously play a huge part in that."

Venturo and his team also spend a lot of time thinking about global trends, such as planning for the eventual rollout of EMV in the United States. Though the U.S. is practically the "last nation on the planet" to adopt EMV, the technology standard for credit and debit card payments, Venturo notes, it likely will be the standard here sooner rather than later, and he and his team have to be prepared to answer questions about how the bank's infrastructure must change to support it.

A Tradition of Innovation

Venturo has a long history of driving innovative projects at U.S. Bank, even before he assumed his current position. One such initiative was the expansion of the MoneyPass network of surcharge-free ATMs. Owned by a company that U.S. Bank acquired in 2005, the MoneyPass network currently operates as part of the Elan Financial Services division of U.S. Bank. At the time of the acquisition, Venturo led the product and strategy team for the line of business that managed the surcharge-free network, and he played a key role in bringing the surcharge-free network to U.S. Bank and its customers.

Venturo also has led many other significant projects at the bank during the five and half years he has been in his current role, including the launch of a series of co-branded credit card apps that began in late 2011 with a partnership with outdoor recreation retailer REI. The partnership allowed users of the REI iPhone app to apply for and receive on-the-spot credit to make immediate in-store purchases. The project was expanded to include other retailers, such as Ace Hardware, and added functionality with Android and iPad apps.

Venturo and U.S. Bank first experimented with NFC-based mobile payments as far back as 2007. Recently, of course, mobile payments have become a hot topic, and while Venturo acknowledges there is great potential in mobile wallets, he says he has yet to see the "ideal solution." "The cloud-based ones are interesting," he comments, "until you're in a situation where you can't get to the cloud. The cloud is not always available inside a retail location." 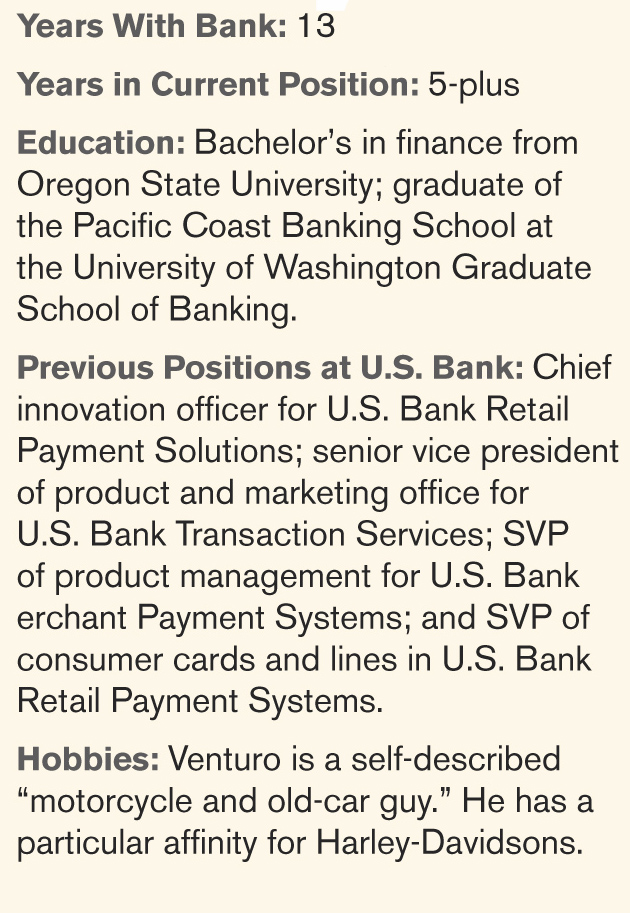 Nonetheless, Venturo believes the early signs of consumer acceptance and adoption for mobile wallets is there. "Some people are already using their phones to do a lot of interesting things that look like payments," he notes.

But Venturo is quick to point out that in his 13 years at U.S. Bank, "What I've learned is that you are rarely your target customer." Among the various roles he's held at the bank, Venturo has been involved in product management as well as with sales and marketing, and he says that's where he learned the importance of using data and research to drive decision making. "What is appealing to me doesn't always test well in a focus group," Venturo admits. "You have to put your personal opinions aside and trust in the research and feedback."

By investing in the customer relationship, in turn, the bank hopes to build trust in the U.S. Bank brand, suggests Venturo, a self-described "motorcycle and old-car guy" who has an affinity for Harley-Davidsons. In addition to making great motorcycles, Venturo says, Harley-Davidson is "a great brand," with brand loyalty that would be the envy of most banks. "Any time you can get a host of people to tattoo your logo on their bodies," he notes, "that's true brand loyalty."