50%
Tweet
Ruckh employs a common vision to drive achievement at the bank. 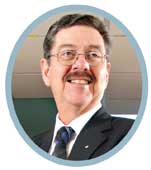 Patrick Ruckh, EVP & CIO, First Horizon
First Horizon EVP & CIO Patrick Ruckh talks to BS&T about the role IT plays in enabling others at the bank to better serve the customers. He also reflects on First Horizon's runaway success in the remote deposit capture space, along with how he thinks the future of U.S. banking will be shaped by mobile and self-service technology.

It's not often a person goes on to work in the field of his chosen degree after graduating from college, and Patrick Ruckh, EVP and CIO of Memphis, Tenn.-based First Horizon, is not an exception. The former organizational development and labor relations major never thought he would end up working in financial services technology. However, after taking a basic computer programming course, a headhunter approached him in 1974 with a programmer position at a bank. Ruckh jumped at the opportunity, and he has been hooked ever since.

And IT isn't the only extracurricular activity that has paid off for Ruckh. Time and again, bankers are reminded of the importance of employing well-rounded IT executives at financial institutions - people who know technology and business. Ruckh might not have known it at the time, but he was on to something when he took the position of chief financial officer and became a certified internal auditor. "I know about controls within the IT organization and outside," Ruckh comments. "This gives me more of a business focus. I consider myself a financial executive who happens to know more about IT than most [other financial executives]."

But perhaps Ruckh hasn't abandoned his college roots completely. He says he realizes the importance of his people in every aspect of what the bank does. "The technology is cool and fun," he remarks. "But where I get my kicks is seeing people grow and provide better service to our customers. You want to enable high-performing people to succeed and make the company successful."

Ruckh achieves these goals by instilling in his staff the value of a shared vision. "Every senior manager's job is to create a vision people can buy in to," he explains. "We want to establish an environment for our people to succeed."

To keep everyone on the same page, Ruckh says, he holds a town hall-style meeting every quarter with all of his employees "to discuss and interpret the vision." He also meets regularly with his direct reports as a group and one on one. Furthermore, Ruckh adds, he maintains an open line of communication with the people on the front lines. He says he draws 10 names out of a hat every month and meets with the workers to discuss what they want, since the vision may not always be as clear to them as to the people on top. "Sometimes, [these meetings] help me understand what I need to do better," Ruckh explains.

According to Ruckh, the focus on his people ultimately trickles down to the customers - a happy employee creates a happy customer. To achieve this, he stresses, First Horizon ($37 billion in assets) provides staff and clients with the right tools for the job. And this is where IT plays a vital role.

One technology that has been an almost runaway success for First Horizon is remote deposit capture. Check imaging has enabled First Horizon to expand its reach well beyond the borders of its home state to commercial customers throughout the country. "I wish I could take credit for this," Ruckh remarks. "The vision here was really from Taylor Vaughn [SVP of treasury management services] from the cash management side and Jim Blasingame [EVP and manager of bank operations] from bank operations."

The bank has pounced on check imaging with a vengeance. It is placing image capture devices at customer sites far outside its original Tennessee footprint. First Horizon also is deploying image-enabled ATMs, particularly in markets where the bank is not the dominant player, to make the deposit process easier. "We want to deliver information to the point of sale and service so employees can help our customers be more successful," Ruckh explains. "That, I think, is what it's all about."

Size of IT Department: 32 percent of management budget is outsourced; 400 staff work for Ruckh directly

Recent Reading: "Match Made in Heaven," by Bob Mitchell