50%
Tweet
Chase is using technology from Wincor Nixdorf and NCR to convert the first 900 of its ATMs to no-envelope machines. The rollout will be complete by 2010.

Though Internet and mobile banking have received most of the attention lately, JPMorgan Chase ($1.24 trillion in assets) is looking to transform an old standby channel: ATMs. As part of an initiative to upgrade or replace 5,000 envelope-based, deposit-taking ATMs with image-based machines, the New York-based institution is rolling out 900 no-envelope ATMs.

"By 2010, all of our deposit-taking ATMs across the country will be no-envelope machines," relates Tom Kelly, a Chase spokesman. The no-envelope ATMs are faster and more convenient for customers, the bank says, and reduce costs for the institution. 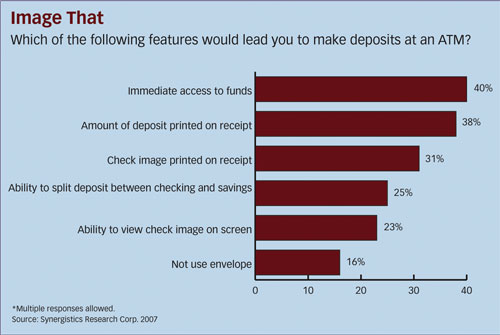 Chase is deploying 600 Wincor Nixdorf (Paderborn, Germany) multicheck ATMs and will install an additional 300 multicheck ATMs from its primary supplier, NCR (Dayton, Ohio), which will provide the back-office software to process check-images. The machines, which can handle up to 30 checks or 50 bills at a time without a deposit slip, quickly calculate the deposit and display the images of the checks on the ATM screen and on a printed receipt, usually in less than one minute, according to the bank. The no-envelope ATMs are ideal for business banking customers, Chase says.

They also reduce the bank's operating expenses. The cost of each deposit falls from $1.70 to just 40 cents when no envelope is used, according to Needham, Mass.-based TowerGroup.

"We will be using on-screen messaging and other merchandising" to educate customers about the new ATM functions, Kelly says. Branches also will have "on-site branch concierge assistance to walk folks through the process," he adds.

Bob Tramontano, vice president of self-service marketing for NCR, says that around the world, check use is not the norm, and the ability to make cash deposits at ATMs is a significant customer-service enhancement. The United States is just now catching up with the rest of the world in terms of such self-service functions, he adds. "[It] opens up the window to do transactions when it's convenient [for the customer]," he says.

Image capture at the ATM also can increase the number of deposits that customers make at the ATM, thereby changing the types of transactions most frequently performed at the ATM. According to Chase, the screen and receipt images give customers more confidence to make deposits at the ATM. The bank says deposit volume at 50 no-envelope pilot ATMs has increased by more than 50 percent.

"The reception has been overwhelmingly positive," Chase's Kelly says of the pilot, which began in 2002 in Indiana and Kentucky. "Customers love the fact that the check images and itemized cash and check counts print directly on their receipts."

According to a July 2007 report from Celent (Boston), five out of the United States' top 10 banks have image initiatives designed to convert existing envelope ATMs to image-based ATMs. But while Check 21 prompted widespread image capture in the branch, Celent notes, ATMs still have a long way to go.