50%
Tweet
A new report from Cornerstone Advisors looks at the evolution of delivery channels by 2020.

Small and mid-sized banks and credit unions must start realigning resources today to survive and thrive in the new business models of 2020, according to a new report from Cornerstone Advisors.

The report, titled "Delivery Redirect: Start Now or Perish Later," argues that banks need not only consider migrating transactions to digital and other non-branch channels, but revenue production as well. Put another way, it’s about migrating and aligning a bank’s channels and resources to support its customers’ financial buying decisions in the future, says Sam Kilmer, a senior director with Cornerstone.

"We're saying this is a call to arms for community banks, and even for midsize and large banks," he says. "It comes down to resource allocation. Banks tend to invest in facilities and people, whereas the disruptors invest in technology and marketing."

"The biggest issue is that digital channels are associated with service and convenience, and the branch is associated with revenue production," notes Kilmer. "That mentality needs to change. By 2020, the majority of originations will not be happening in the branch." 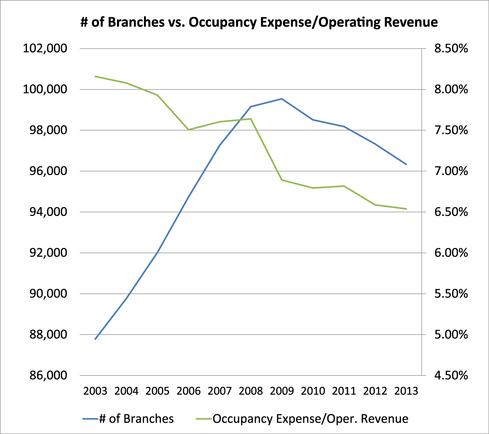 According to Cornerstone, banks must start the process now of casting off channels that no longer make economic sense for the bank. This may mean alienating some customers, but the firm says banks can't please every single one of their customers, and in fact should not try to do so. Instead, banks must decide which segments will provide future growth and which deserve a "handshake and hearty good-bye."

The report states that in the near future, the branch will no longer be the primary channel for customer acquisition, and thusly banks must make it easy and convenient for customers to do business with their firm in any channel. Further, banks will need to change their staffing and support models, which can mean having centralized digital tellers, or groups of employees that support a particular customer list or have the skill sets to do it all from opening an account to making loans. Banks will also need to rely on technology-equipped outbound bankers to drive sales and relationship management, states Cornerstone.

As banks change their delivery model, Cornerstone also predicts contact centers will be the preferred entry point for customer service. In 2020, contact centers will actually be bank employee “hubs” and will act as extensions of physical and digital channels to help drive increased product usage, revenue and customer satisfaction, the firm predicts. These hubs will include digital tellers supporting transactions across a variety of channels, universal bankers to cross-sell services, open new accounts and advise on loans and other services, and social media and self-service support, the report states.

According to David Potterton, research director at Cornerstone, community banks don't need to invest in every cutting-edge innovation out there on the market, but instead can focus on one or two specific areas right now. The important thing, he notes, is to have some kind of plan in place.