Banks are beginning to realize that biometrics offer a viable solution in today's security- and compliance-conscious environment, according to a report by Aite Group, a Boston-based consultancy. Today, only about 5 percent to 7 percent of U.S. financial institutions have deployed biometric technologies, the study reports.

However, Aite Group's Christine Barry, director of research, wholesale banking, and author of the study, asserts that more banks currently are considering the technology. "I'm hopeful because any time there's a [biometrics] deployment [at a financial institution], the users are usually happy with it," she remarks.

According to the International Biometric Group (New York), the biometrics industry generated $1.2 billion in revenues globally in 2004. Aite Group predicts this will double by 2008, especially in the financial services industry, where more deployments are expected at the point of sale, and in the healthcare sector as a result of the Health Insurance Portability and Accountability Act's (HIPAA) regulations. 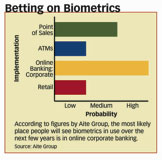 The recent recommendations by the FFIEC for two-factor authentication have thrown biometrics into the limelight, according to Aite Group. "There's a scramble because banks have until the end of the year [to comply with the FFIEC guidance], so they're exploring all their options," explains Barry.

The recent trend of well-known vendors in the financial services space partnering with or buying lesser-known biometrics companies also is leading banks to give biometrics a second look. "A concern [among banks] was, 'Who's this biometrics company?'" comments Barry. Having a big banking vendor behind a biometrics venture, therefore, lends more credence to the technology, she opines.

Other barriers to adoption also seem to be falling by the wayside. Although cost has been a factor with the technology, prices for biometric devices have moved progressively lower as the technology has matured, Barry notes. Further, though banks have been turned off by the perception that it is difficult to establish a biometrics program, Barry says setup and enrollment of users takes just a few minutes.

"Today, banks' biggest concern is whether customers will use [biometrics]," Barry says, adding that while banks have done a good job of educating consumers about biometrics, more work needs to be done. However, she points out that vendors say the banks finally seem to understand the technology and no longer require lengthy explanations as they did in the past.

Barry notes that biometrics devices are not ideal for all financial transactions. Banks could take a selective approach to deployment, reserving biometrics only for high-risk transactions, such as wiring money, she suggests. "There are different levels of risk, and the [FFIEC] guidance allows for this," Barry says. --Maria Bruno-Britz